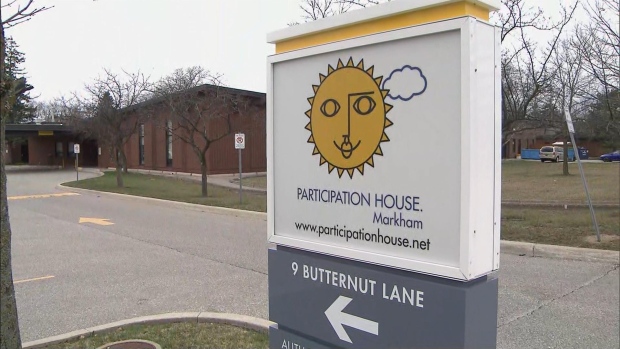 Thirty-seven residents of an Ontario facility that supports adults with developmental and physical disabilities have been diagnosed with COVID-19, according to a letter sent to families.

The letter was by the executive director of Participation House on Tuesday and was obtained by CTV News Toronto. In the document, director says that 36 of the 42 people who live at the facility now have the virus.

An additional positive case was confirmed by Markam Stouffville Hospitsl later in the day, as well as 12 cases among the staff at Participation House.

“The disease process is beginning to take its toll on our residents, a very different picture from even yesterday,” Participation House Executive Director Shelley Brillinger said in the letter sent Tuesday. “We have sent three residents over to the Markham Stouffville Hospital (MSH) for care. One additional resident was taken home early last week, but is known to be positive and is also at MSH.”

“This morning we are in full medical emergency mode and have the medical cavalry coming ASAP.”

The new case count represents a sharp increase from Monday, when the facility reported 12 positive cases in residents and six staff members who had contracted COVID-19.

Participation House has experienced a major staff shortage since workers walked out last week as a result of the outbreak.

The union representing the workers said the staffing shortage is not the result of job action.

“When Participation House management announced to staff on Thursday that there had been confirmed COVID-19 cases they informed staff that they could self-quarantine,” Diego Mendez said on Monday. “Many staff, particularly those staff who are elderly or have vulnerable individuals at home, understood that as permission to leave.”

Mendez said that until the workers have received a negative test result and have been symptom-free for 24 hours, it is not safe for them to return to work.

Brillinger said that on a regular day, prior to the outbreak, the facility would employ eight personal support workers (PSWs) and one nurse per shift.

On Monday, Brillinger said there was a shift where only two PSWs and an additional nurse were available.

Bruce Sutherland’s 63-year-old brother, James, who has cerebral palsy and is confined to a wheelchair, is one of the residents who tested negative for COVID-19 at Participation House. Despite the diagnosis, Sutherland said his family is very worried.

“I’m a bit alarmed and concerned for my brother’s health because he’s very susceptible to getting pneumonia,” Sutherland said. “It’s a fantastic facility. I’m just disappointed in the people who left.”

Sutherland said that removing his brother from the facility is not an option. For the most part, his brother appears to be getting the care he needs and is confined to his room while staff deal with the outbreak.

In a joint statement with Participation House released Tuesday afternoon, Markham Stouffville Hospital said they have assembled a “rapid response team” to support Participation House, including patient care and HR support to help with staffing needs.

The hospital is also providing meals for residents as well as personal protective equipment.

At this time, the residents are being supported on an interim basis by existing staff and onsite and virtual support from Markham Stouffville Hospital,” the statement said. “There continue to be a number of challenges and the hospital is working with Participation House on sustainable solutions for staffing, medical support, infection control expertise and supplies.”

James Sutherland, 63, is seen in this undated photograph provided by family.