The family of a Grade 9 Markham student who died suddenly while at school Tuesday said the teen likely suffered from heart failure.

The Bill Crothers Secondary School student, who has been identified as 14-year-old Ben Stanton, was rushed to hospital Tuesday after suffering a medical emergency at school but died a short time later.

An exact cause of death has not yet been determined.

In a statement released Thursday, Stanton's family said he had been a cardiac patient at Sick Kids Hospital since he was an infant and was carefully monitored.

"We wish to ensure that anyone who knew Ben, especially those who were with him around the time of his death, know that there was nothing that anyone could have done to prevent his sudden passing," the statement said.

"He died in the school he loved, surrounded by friends, teammates and faculty that knew him and cared for him."

According to his family, the 14-year-old had an "immeasurable" love of sports.

"...he was thankful everyday for the opportunity to be around friends and teammates that drove him to be the best he could be," they said.

"At this difficult time, the family and friends request privacy as they grieve. Thank you again for all of your support."

Grief counsellors were on hand at the York Region school on Wednesday to help faculty and classmates cope with the loss.

"Teachers are aware that students might be struggling and they are making themselves available to the staff to deal with any questions or concerns they might have," she said. 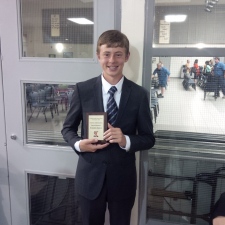 Ben Stanton is pictured above in this undated photo. (Submitted photo)