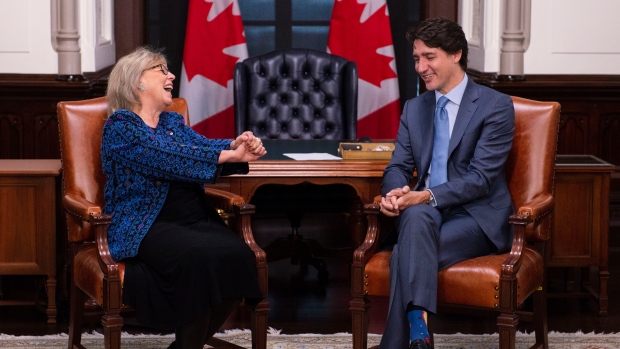 OTTAWA - Justin Trudeau finished a week of meetings with opposition leaders with the Green party's Elizabeth May on Friday, and she pushed the prime minister to attend an international climate change summit just as MPs get back to work in the House of Commons.

May emerged from the morning meeting saying that she told Trudeau he needed to attend the summit in Madrid next month to push countries to be more ambitious in their emissions-reduction targets.

The Liberals promised during the election campaign to put Canada on a path to being carbon-neutral by 2050, and May said a strong statement from the leader of an oil-producing country at the international summit would send a strong signal to other nations.

But attending would be difficult for Trudeau because the summit takes place as the Commons begins sitting again Dec. 5, including a throne speech that will lay out his general plans for governing. The UN gathering - the 25th Conference of the Parties to the United Nations Framework Convention on Climate Change, or “COP25” for short - runs from Dec. 2 to 13.

May said Trudeau told her he would discuss green issues with his environment minister once the new cabinet is sworn in next Wednesday. She said she anticipates Catherine McKenna will be moved from the role after holding it for the Liberals' whole first term, speculating that rookie Liberal MP Steven Guilbeault, a long-time environmentalist, makes an obvious choice for the position.

May said Trudeau also promised to bring new legislation to harmonize federal laws with the United Nations Declaration on the Rights of Indigenous Peoples (UNDRIP), addressing a key Green request, and to stave off the loss of abortion services in New Brunswick.

A bill to do that in the last Parliament died in the Senate when the election was called.

May has stepped down as overall Green leader but is still the head of the Greens' three-member caucus in the House of Commons.

Trudeau has sought common ground with the Conservative, Bloc Quebecois and NDP leaders in separate sessions as he prepares to return to Parliament in December without a majority in the Commons.

He'll need the backing of at least one of those parties to get any law passed, and his first test will be to get support for his speech from the throne.

May suggested she may not be able to support a throne speech that includes a plan to build fossil-fuel pipelines.

The Greens elected more MPs in the October vote than they've ever had, but remain the only party in the Commons that doesn't have the numbers to give Trudeau's Liberals a win by voting with the government.

That made Friday's meeting more a courtesy than a negotiation between rivals seeking to find compromises to advance their agendas.