Rob Ford was asked to leave a military charity event last month after guests noticed that he was speaking in a “rambling and incoherent matter,” a report in the Toronto Star says.

The story, which quoted several unnamed organizers and guests at the Garrison Ball, claims that Ford showed up late to the event at the Liberty Grand on Feb. 23 and was asked to leave about an hour later because he seemed impaired.

According to the Star, several unnamed guests described Ford as “stumbling,” “rambling,” and “intoxicated,” during his time at the event, which was held to raise money for the Wounded Warriors military charity and was attended by Minister of National Defence Peter MacKay and Chief of Defence Staff Gen. Tom Lawson. Coun. Paul Ainslie, a member of the mayor's executive committee, confirmed to the Star that Ford was asked to leave but wouldn't give a reason.

Meanwhile, Ford told reporters camped outside his office Tuesday morning that the allegations are “nonsense.” He then repeated that denial after handing boxer George Chuvalo the key to the city during an event Tuesday morning.

Scott Maxwell, executive director of Wounded Warriors, said he did not attend the event but he was not told afterward of any issues involving the mayor.

“This is the first I’ve heard about any sort of allegation about him being asked to leave,” Maxwell said of Ford. “I haven’t heard a single thing about his behaviour.”

Event co-chair Mark McQueen told the Star that he was not aware that Ford had even been asked to leave.

“When I saw him interacting with guests, albeit from a distance, people were cheerfully introducing themselves to him and posing for photographs,” McQueen wrote in an email to the Toronto Star.

Another attendee quoted by the Star also said the mayor seemed OK.

In an email to CP24, Minister of Defence Peter MacKay concurred with that assessment.

“I chatted with Mayor Ford briefly,” he said. “He looked fine to me.”

Earlier on Tuesday morning deputy mayor Doug Holyday told reporters that he doesn’t believe that the mayor would have acted inappropriately.

“From what I have seen of the mayor I just don’t see this. He does things in his own way that might be different than others but that’s about it,” he said. “I think the story would have a lot more credibility if it had the names of the individuals making the accusations attached to it.”

The alleged incident at the Garrison Ball occurred just two weeks before a former mayoral candidate accused Ford of groping her at an event held by the Canadian Jewish Public Affairs Committee.

Sarah Thomson has previously said that Ford seemed intoxicated before making an inappropriate comment to her and grabbing her buttocks as the pair posed for a photo at the event on March 7.

“I’ve never seen him take a drink,” Holyday said Tuesday. “I know at certain times he has pushed into large crowds and it’s hot and he tries to get a drink of water and he spills some on his shirt and the next thing you know it looks like he is sweating and that he is not well kept. Other times, the mayor has a habit of rolling his eyes and if you take enough pictures you are going to catch that and it looks like something is amiss. In totality I just don’t see it.”

Doug Ford says the paper is out to get his brother

Ford has had a long-standing feud with the Star dating back to a story published during his 2010 election campaign.

The story, originally subject to legal action by Ford, concerned an alleged altercation the mayor had with a high school football player while a coach at Newtonbrook Secondary School in North York in 2001.

As a result, Ford has refused to grant interviews to the Star since assuming office.

In the past he has also accused them of following him to his summer cottage and stalking his mother.

Speaking with AM640 Tuesday morning, Coun. Doug Ford said the paper has an axe to grind with his brother.

“They have thrown out allegations from the day Rob got elected. The Toronto Star can’t stand Rob Ford and their main goal is to get Rob out of office,” he said. “They aren’t going to stop for the next two years and it is just going to continue.”

Responding to Doug Ford’s allegations in an interview with CP24 on Tuesday afternoon, Toronto Star Editor Michael Cooke said the paper is just doing responsible journalism and has no bias against the mayor.

“Do we make this stuff up? Do we sit down at 1 Yonge Street (the Star’s office) and think how can we put a harpoon in the mayor today? No we don’t,” he said. “We do solid and honest reporting. This story is solid and airtight.” 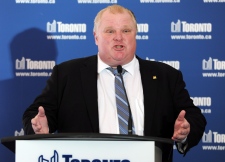 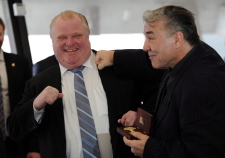