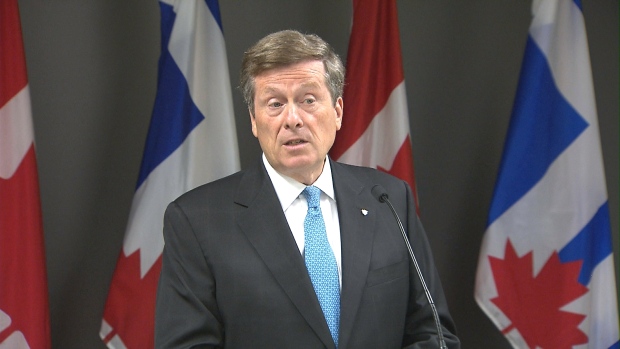 Mayor John Tory says he believes the ongoing debate over allowing new Canadians to wear a niqab during citizenship ceremonies is “corrosive” and goes against Canada’s tradition of embracing diversity.

Tory, who has largely refused to weigh in on the ongoing federal election, made the comment to reporters outside city hall on Thursday morning after he was asked for his opinion on the Conservative government’s push to have the niqab banned during citizenship ceremonies as well as recent comments from Stephen Harper indicating that he would consider banning federal civil servants from wearing face-covering veils if reelected.

“I just wish those discussions would come to an end because I think they end up being corrosive. Regardless of who you think is right or wrong it is corrosive,” Tory said. “I was asked the other day what allows us to maintain an independent identity in the face of living next door to the United States and I said it is because we embrace diversity here. That has added to our values and it has strengthened our values.”

The Conservative party has come under fire for its position on the niqab with some accusing the party of using divisive politics to distract Canadians from the important issues.

At the same time, the party has enjoyed a resurgence in the polls that has coincided with Harper’s public comment on the niqab.

Speaking with reporters, Tory said he can understand both sides but ultimately wants the debate to be put aside.

“I just think these debates don’t prove to be very productive because I am not sure there is a right or wrong answer. I just hope they come to an end,” he said.