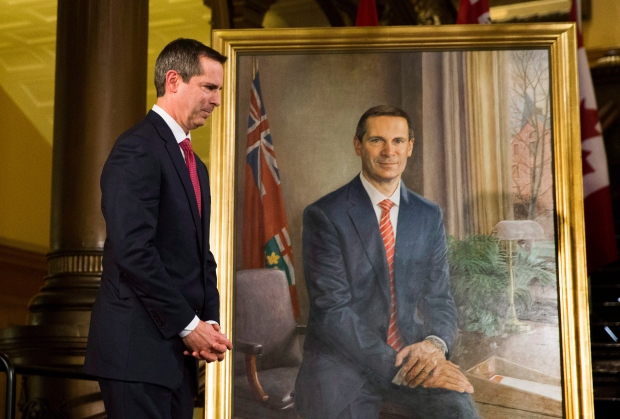 Former Ontario premiere Dalton McGuinty walks by his official portrait after it was unveiled at Queen's Park in Toronto on Tuesday, Feb. 23, 2016. (The Canadian Press/Mark Blinch)

TORONTO -- It was the closing of coal plants, not gas plants, that dominated comments at the unveiling of the official portrait of former premier Dalton McGuinty at the Ontario legislature on Tuesday evening.

Premier Kathleen Wynne praised her predecessor for having the foresight to end coal-fired electricity generation, for introducing full-day kindergarten and boosting the high school graduation rate, and for always keeping his eye on the road ahead.

"I see a health care system on a sustainable footing, able to adapt to our changing needs, and I see a diverse, resilient economy capable of weathering the toughest storms," Wynne told the Liberal-dominated crowd.

"I see a province leading in the global fight against climate change because of this man, Dalton McGuinty's determination to shut down our coal-fired power plants and kick start our renewables sector."

McGuinty, who has maintained a low public profile since resigning in Oct. 2012 in the middle of a scandal over his government's decision to cancel two gas plants at a cost of up to $1.1 billion, also raised the coal plants in his speech.

"When Ontarians were the first in North America to shut down our coal plants, we led," he said. "We've gone from 52 smog days in a year to none."

Lt. Gov. Elizabeth Dowdeswell said McGuinty decided to "heed the call and follow in his father's footsteps" after Dalton McGuinty Sr. died in 1990 during his first term as the MPP for Ottawa South.

McGuinty joked that his parents would have had different reactions to the laudatory comments being heaped on him at the portrait unveiling.

There was no mention Tuesday of the cancelled gas plants that caused McGuinty so much grief in his final days in office, with a nasty debate on accusations of contempt of Parliament over the deletion of emails the controversial decisions.

Lawyers for McGuinty's former chief of staff and deputy chief -- who face criminal charges related to the deletion of gas plant emails -- are scheduled to appear in a Toronto court Wednesday.

The former premier made a thinly-veiled show of support for Laura Miller and David Livingston, without naming them, as he thanked his former staff Thursday night.

"I make no exceptions in this regard," McGuinty told the crowd. "My praise and gratitude are for all my staff, each and every one a person of good character with whom I had the honour to work."

McGuinty published an autobiography last year in which he blamed "experts" who picked the Mississauga and Oakville sites for the gas plants that his government cancelled just days before election day in 2011.

McGuinty now acts as a senior adviser to the Waterloo-based education technology company Desire2Learn and serves on the boards of two other companies.

The official portrait, by Collingwood-based artist Istvan Nyikos, shows McGuinty perched on the edge of his desk in a Queen's Park office, wearing his trademark blue suit and red tie.

Nyikos also did the portraits of former premiers Bill Davis and Mike Harris, which are also displayed near Wynne's office, as well as the official portraits of three former Speakers of the legislature.