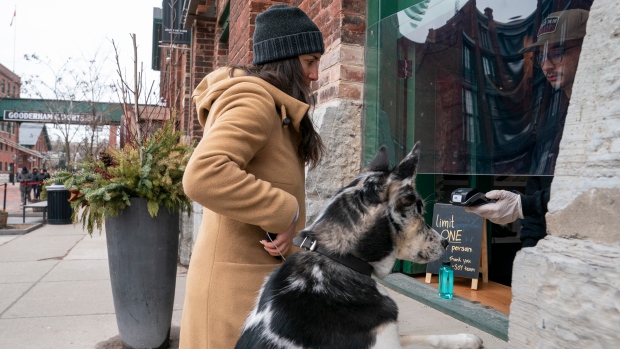 A woman buys hand sanitizer made by Spirit of York Distillery in Toronto on Thursday March 19, 2020. The distillery switched their production over to hand sanitizer and all proceeds are going to charity. THE CANADIAN PRESS/Frank Gunn

TORONTO - Looking for a way to help amid an outbreak of the novel coronavirus sweeping across Canada, Toronto-based Spirit of York Distillery Co. didn't have to go very far.

Instead of its usual vodkas and gins, the company decided to shift its Toronto production facility toward something Canadians have been emptying from store shelves: hand sanitizer.

“It's just trying to do a small part to help everyone through this crisis,” said Spirit of York president Gerry Guitor.

The pivot Guitor made places him among a growing group of Canadian businesses that are producing new merchandise, stocking different products or changing up the services they offer to meet the needs of a country grappling with a global health emergency.

The distillery is preparing to sell at least 1,000 bottles of sanitizer starting Thursday, with bottles priced at $2.95 to cover costs. For those who can't afford it or who are over 65, Guitor will waive the fee. All the proceeds will go to local food banks to support community members that have limited access to food or are unable to leave their homes.

At least 550 Canadians have been infected with the virus known as COVID-19 and the number is steadily climbing. The situation has created unprecedented demand for groceries, toilet paper, and products and services that are delivered, leaving companies clamouring for additional inventory and staff.

“We were sitting around here with an empty store and a building full of alcohol, so we thought what can we do?” the founder of the Beamsville, Ont., said by phone, as he readied the bottling line to go.

The company sourced some aloe, so they made a big basket of hand sanitizer and gave it away on Friday, prompting plenty of people to come forward and offer time and supplies. Now it's working on more hand sanitizer and on full-size bottles of disinfectant with a 65 per cent alcohol content.

Dillon's was prioritizing getting the items to first-responders and essential service providers. It will offer the remainder to the general public later, but there will be a maximum of one bottle of disinfectant per person. It decided not to charge people.

The demand is so high that Dillon said, “we are just using alcohol bottles that were sitting in our warehouse, but we are going to run out of those shortly.”

In Quebec, Mandy's Gourmet Salads was also eager to help.

The salad chain, which has locations in the Montreal area, closed its dining rooms to help stop the spread of the virus. It is still open for takeout, delivery and has added a new concept for the brand: groceries.

“I actually went into our neighbourhood grocery store and they didn't have any oat milk or almond milk and we carry amazing oat milk at Mandy's, so I went and stocked up and a friend of mine actually was just laughing to me that she should get all her groceries at Mandy's,” said company co-founder Rebecca Wolfe.

Within no time, Wolfe and her sister and co-founder Mandy Wolfe had baskets of avocados and containers of oat milk out for sale. They worked with their suppliers so they could begin on Wednesday selling tomatoes, cucumbers, granny smith apples, mock chicken, almond milk, lettuce, salad dressing and hot sauces.

Meanwhile, in Edmonton, Matthew Stepanic hit the road with his corgi Bob for a new - and free - delivery service for the Glass Bookshop store he co-owns.

“We were thinking people are choosing to self isolate and we should encourage that behaviour as much as possible, so that's when we started offering the book deliveries,” he said.

Over the weekend they got a dozen orders, but once their store closed that number quadrupled.

“When you're alone and you're just scrolling through Netflix, a new book is a different type of comfort in trying times and we wanted to be able to provide that,” he said.

Executives at some of the country's largest enterprises are also thinking about helping by pivoting their businesses, hinted Ontario Premier Doug Ford.

“I've also heard from the automotive part manufacturing association. They've offered their support,” he said. “Ontario factories have offered to alter their production. They have the tools to make important health equipment and they're ready to help.”

Christine Elliott, the province's health minister, later went on to say parts makers are looking to retool in order to make ventilators.

That doesn't mean making a pivot is easy.

Spirit of York's Guitor said his company not only had to teach itself how to concoct a different product, but also had to find hydrogen peroxide, which was elusive, and track down 140 mL sanitizer bottles with a plastic top.

Still, he believes even more businesses should rise to the occasion.

“We're just a small distillery in Toronto trying to make our way, but imagine if the big guys would do that and would send a message,” he said.

With a file from Allison Jones in Toronto

Spirit of York Head Distiller Mark Harrop (left) and founder Gerry Guitor pose with bottles of distillery-made hand sanitizer in Toronto on Wednesday March 18, 2020. With an outbreak of the novel coronavirus sweeping across Canada, Toronto-based Spirit of York Distillery Co. had an urge to do something to help, so they looked no further than the company's production facility. Instead of pumping out its usual vodkas and gins, the company decided to make something Canadians have been emptying from store shelves: hand sanitizer. THE CANADIAN PRESS/Frank Gunn