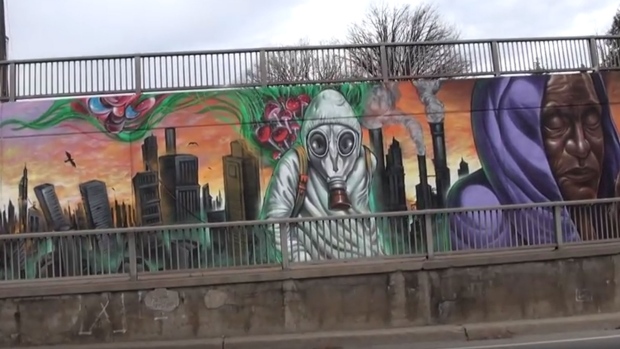 A mural depicting scenes of global warming in the city’s Yorkdale/ North Park area has failed to warm the hearts of some area residents.

The global warming mural by the Essencia Art Collective was completed under the Lawrence underpass on Lawrence Avenue, west of Caledonia Road in mid-November and was meant to inspire people to protect the planet.

It features scenes of polar bears, owls and whales, along with surreal scenes – some of them post-apocalyptic – and images of various people, some of them with their faces obscured by masks, including a gas mask. The project was completed in partnership with StreetArt Toronto, a city program that supports public murals.

But far from feeling inspired to chip in to fight climate change, some area residents complained the images are “scary,” prompting the city to consider changing the artwork.

That prompted an online petition defending the mural which has already received 973 signatures so far.  According to the petition’s author, Paul Salvatori, altering the work would amount to ‘censorship.’

However Councillor Frank Di Giorgio, who represents the area, told CP24.com Monday that "censorship doesn’t enter the equation at all,” when it comes to the mural. Rather, he says the issue is that the normal consultation process was “short-circuited.”

The mural was originally slated for an underpass along Jane Street and residents in that area were consulted, Di Giorgio said. However permission to place the mural there was denied at the last minute and it was moved to the Lawrence location without local consultation.

Di Giorgio said a handful of people that he is aware of have contacted his office about the mural so far.

“Because the process was altered we need to take some action to remedy the situation,” he said.

However he noted that people do not appear to object to the entire mural, but portions of it.

“The whole mural in itself is not an issue. There are parts of it that have received some mixed reaction,” he said.

One of the images shows a human figure with a  deer skull, a scene Di Giorgio said is “overbearing and quite frankly can be a scary image.” The other shows a human in a gas mask and hazmat suit.

On the petition website, Salvatore acknowledged that the artwork is “challenging,” but said the mural is nevertheless an “important statement about the dangers of environmental degradation and a reminder of the natural splendour we stand to lose if the earth is left unprotected.”

Residents will have a chance to voice their thoughts about the mural at an open house being held Tuesday, December 8 at 6:45 p.m. at the Amesbury Community Centre (1507 Lawrence Avenue West). The meeting is being organized by Di Giorgio’s office and will feature a presentation on the mural by Essencia. City staff from StreetArt Toronto will also be on-hand to answer questions about the work.

Changing mural would compromise ‘integrity of the entire wall’

Speaking with Cp24.com Monday, Fiya Bruxa, one of the three artists who created the mural, said she is looking forward to having the opportunity to speak with members of the community about the work and to create a dialogue.

Bruxa said while the local community may not have weighed in specifically, consultations on the mural were held in other places across the city and received positive feedback. She noted that a large volume of traffic composed of people from across the city pass through the underpass space every day.

Bruxa said she was surprised to hear feedback that described some of the imagery as violent and said art tends to be perceived through the lens of the viewer’s world perspective.

She said the mural is meant to represent a moment in time and “removing any part of it would put into question the integrity of the entire wall.”

She added that if some people don’t like what they see, it may be because uncomfortable realities are reflected in the work.

“There are nations now that are wearing gas masks, there are species that are disappearing because of the tar sands or mining industry,” she said. “The deer skull for example is representative of the animals that have passed away and are coming back to protect their land. The gas mask is representative of our air contamination.”

She also took issue with the idea that covering or changing part of the image would not be censorship.

“Whether people get it or not or whether they like it or not, when an image is changed – weather it’s in literature or visual arts – and it is no longer accessible to those who do want to see it, it does fall under censorship. It’s selective suppression,” she said.

Still, she said at the end of the day, she and her fellow artists will have to hear what the community says and respond appropriately if need be.

“Because we work with community, if there is an overwhelming amount of people that demand it be changed then we will have to accommodate and respect that,” Bruxa said. “But I think that it’s very important to take into account that the mural is not reflecting any kind of hate, crime or racist, misogynist ideals.

“If we are not working in that space and they are simply images that people don’t like, we enter into a dangerous zone.”

Di Giorgio said the meeting Tuesday will allow officials to explain to the community what went wrong with the consultation process and to see how they feel about the work after hearing from the artists. He said it will ultimately be up to city staff to weigh input from the community and the artists and decide whether the mural should be altered.

The Essencia Art Collective has completed a number of nature-themed murals around the city, most recently on a Hwy. 401 underpass near Weston Road for a portion of the Pan Am Path.