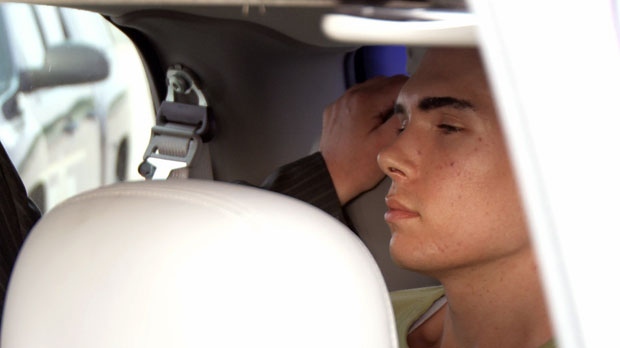 In this photo provided by Montreal Police, Luka Rocco Magnotta is guided into a waiting van after arriving from a Canadian military plane on Monday, June 18, 2012. (AP Photo/Montreal Police)

MONTREAL -- Luka Rocco Magnotta's legal team will continue one lawyer short after an attorney stepped down on Wednesday.

Raphael Feldstein announced he would remove himself from the case after the Crown raised the issue about a possible conflict of interest.

The details of the alleged conflict, as with other evidence being heard during the preliminary hearing, are covered by a publication ban.

Magnotta is charged with first-degree murder in the slaying last May of Jun Lin, a Concordia University engineering student from China. He is also facing four other charges related to the case.

Feldstein withdrew voluntarily in the afternoon before both sides could debate the matter further.

The preliminary hearing heard from three more police witnesses during a third day of hearings at the Montreal courthouse.

Magnotta wore glasses, a black sweater and jeans as he sat impassively listening to witnesses.

Lin's father, who left the courtroom in tears on Tuesday, did not return Wednesday. A lawyer for the family says he may return later in the week.

The three-week hearing will determine whether there is sufficient evidence to send Magnotta to trial.

A publication ban on evidence heard at this stage is automatic when requested by the defence. It remains in effect until either the case against Magnotta is dropped or until the end of an eventual trial.

The hearing continues on Thursday.