Members of a Toronto mosque are calling on police to investigate the murder of a 58-year-old volunteer as a hate-motivated crime, calling it a “ brazen act of violence” that has shaken the community.

One week ago, Mohamed-Aslim Zafis was sitting outside the International Muslim Organization (IMO) mosque near Rexdale Boulevard and Bergamot Avenue ensuring everyone was complying with COVID-19 health regulations when he was approached by a man and stabbed.

On Saturday, about 75 people gathered outside the same mosque, offering their prayers and remembering Zafis—a man known for his charity and goodwill.

“He was a good man. A man who was good with his friends and a man who took care of this place of worship with every ounce of his efforts,” Omar Farouk, president of the IMO, said while addressing the crowd. “ The reality is that every person knew brother Mohamed would testify to this.”

Farouk said that Zafis’ death has sent a “ shockwave of fear and deep concern” throughout the community, citing a growing number of hate incidents targeting the Muslim community.

“However, I want to be clear that we will not be intimidated,” Farouk added. “ We will not go softly in the night. In a few days we will be letting you know when the mosque will be reopening for prayers. Because the reality is that no one is going to stop us from being here, the place we love." 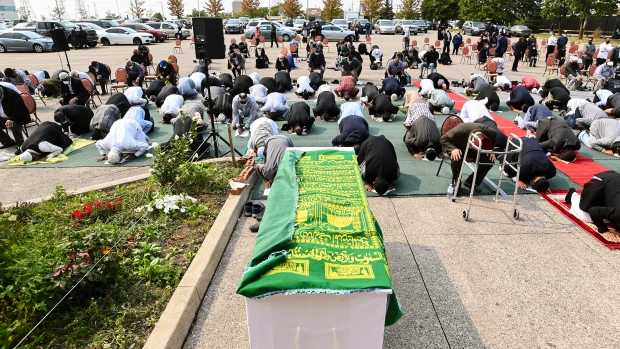 Speaking through tears, Mustafa Farooq, CEO of the National Council of Canadian Muslims, spoke about the moment he learned of Zafis’ death.

“Exactly one week ago, almost to the hour, I stood right there in the dark, with the blue and red flashing sirens. We had to look upon a sight that no one should have to look upon. Let me be clear, a man came to this mosque. He murdered our brother Mohamed-Aslim Zafis by slitting his throat. He was laying right there. It was a brazen act of violence.”

Both Farooq and Farouk took time to praise the Toronto police for their swift investigation, which led to the arrest of a 34-year-old man on Friday.

The suspect, identified by police as Guilherme “William” Von Neutegem, has since been charged with first-degree murder in connection with the incident.

At the same time, the IMO called for police to continue to investigate the death of Zafis as a hate crime.

“The fact of the matter is that when you have our brother's throat slit in front of a mosque in the midst of continuing risk of attacks on religious institutions, in the midst of the growing number of hate incidents targeting the Muslim community, we have to take this matter, extremely seriously,” Farouk said.

Police have previously said there does not appear to be any relationship between the accused and the victim.

Supt. Ron Taverner spoke briefly at the vigil to say that the murder has had a direct impact on his officers, some of which are members of the mosque.

“They're deeply touched by what's going on here and the level of violence that's taken place,” he said. “This is something that's affected our family and your family.” 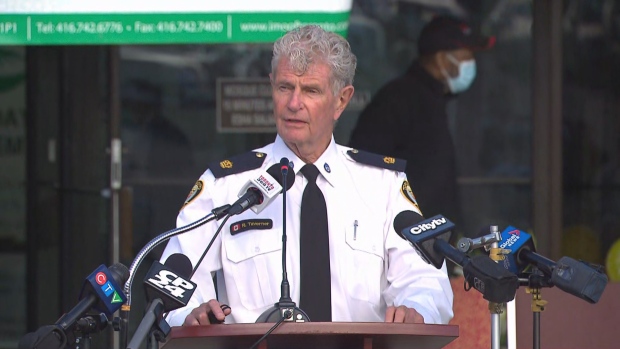 Taverner went on to say that the investigation is ongoing and that police will “ leave no stone unturned.”

Speaking with CP24 later that day, Taverner added that police are aware of allegations that the murder suspect had ties to a neo-Nazi social media group.

“As far as the investigation goes, looking into the social media of the accused is an important part of trying to determine motive. That process is ongoing and hopefully we can have answers to that question in the coming days.“

Earlier this week police said they were investigating whether the homicide was connected with another fatal stabbing on Sept. 7 near the West Humber Trail under the Highway 27 Bridge, just south of Humber College Boulevard.

Toronto police Insp. Hank Idsinga said at the time that it was still early in the investigation to say if there is a definitive connection or if the incident was hate-motivated.

“The investigation is still very active. I have about 14 investigators right now in and around 23 Division and it is going to take some time,” he said. “There's several different avenues that we're exploring and the forensic evidence will obviously as well take some time before we can make some conclusions on that other investigation.”