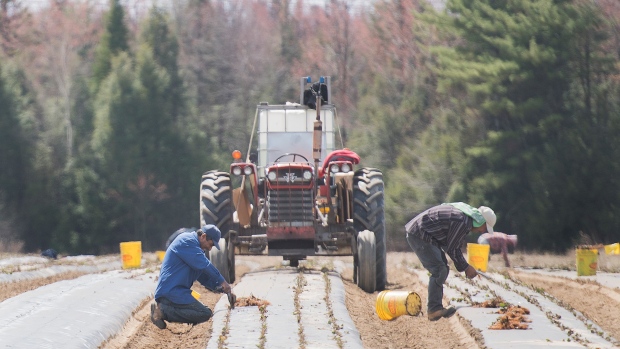 Temporary foreign workers from Mexico plant strawberries on a farm in Mirabel, Que., Wednesday, May 6, 2020. The Mexican government says it will resume sending farm workers to Canada after securing a promise of better working conditions to curb outbreaks of COVID-19. THE CANADIAN PRESS/Graham Hughes

TORONTO, April 14 (Reuters) -- Pedro, a Mexican migrant worker, knew he had to leave the Ontario cannabis operation where he worked when so many of his coworkers caught COVID-19 that his employer began to house them in a 16-person bunk house alongside the uninfected.

Pedro moved in with friends in the nearby farming town of Leamington, Ontario, at the end of October. He asked to be identified under a pseudonym because he fears that speaking out will affect his chances of employment.

"I didn't know where to go, where to get help. So I was left behind, hopeless," he said, speaking through a translator. About a week later, Pedro landed another job, working with peppers in a greenhouse. Conditions are better, he said.

But he added: "To be honest, I don't think all employers are taking precautions."

Pedro is one of about 60,000 migrant farmworkers - many from Central America and the Caribbean - who come to Canada as part of an annual migration of people that ramps up in spring. They grow and harvest the country's food supply and have continued to work in the midst of a pandemic.

They feed the country and are a crucial part of a C$68.8 billion ($54.8 billion) sector, making up about one-fifth of the country's agricultural workforce, according to the Canadian Federation of Agriculture.

As the pandemic crippled travel last year, agricultural employers were unable to fill one-fifth of the temporary foreign worker positions they needed, costing Canadian farmers C$2.9 billion due to labor shortages, according to research commissioned by the Canadian Agricultural Human Resource Council.

These workers are also uniquely at risk. They live and work in crowded settings, and language barriers coupled with precarious immigration status tied to their employment prevent them from speaking out about unsafe conditions.

Last year they were hit hard by COVID-19, with 8.7% of migrants in Ontario testing positive. This year they are returning as Canada is in the grip of a third wave. While governments and employers say they are taking steps to keep these workers safe, advocates and workers contacted by Reuters say the dangers remain - except that now, those dangers are known.

Syed Hussan, executive director of the Migrant Workers Alliance for Change, argues the same factors that made workers more vulnerable to COVID-19 last year - crowded workplaces, congregate living, visas that tie them to an employer and make them fearful of speaking out - still exist.

"We are walking into the same crisis yet again, the only difference being that we already know how bad it is."

Keith Currie, vice-president of the Canadian Federation of Agriculture, said employers are doing their best, but some transmission of the virus will occur.

"Because they're living on the farm, they're in contact with each other when they're working ... despite all our efforts, it spreads. Just like it does elsewhere in society."

Some 760 farmworkers have been infected so far this year in Ontario, Canada's most populous province, according to provincial data. Ontario put agriculture workers in Phase 2 of its COVID-19 vaccinations, which begins this month, and has set up a clinic at Toronto’s airport offering vaccines to migrants on arrival.

But advocates worry migrant workers might lack requisite identification, especially if they are undocumented.

Advocates argue not enough is being done to keep these workers safe from the pandemic. They say rules such as the requirement to get - and pay for - a COVID-19 test within 72 hours of coming to Canada place an undue logistical and financial burden on migrants.

But the migrants interviewed by Reuters argued what will protect them is more stable status that does not tie them to an employer.

"Hopefully this year, the government of Canada gives us status," said Teresa, a migrant worker from Baja California.