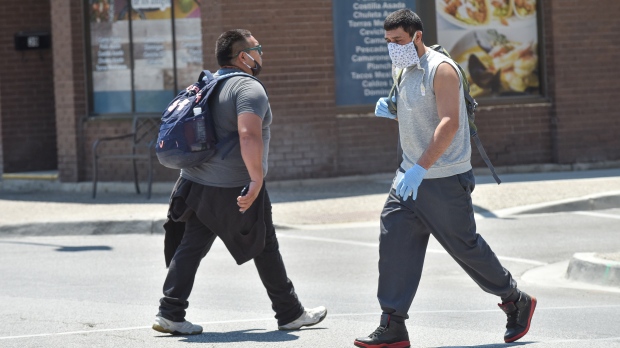 In this file photo, migrant workers from Mexico walk across Talbot St. in downtown Leamington, Ont., Tuesday, June 30, 2020 after doing some banking. THE CANADIAN PRESS/Rob Gurdebeke

TORONTO - A new strategy to prevent COVID-19 outbreaks on Ontario farms does not go far enough to protect vulnerable employees, migrant worker groups said Tuesday, as the province and farmers pledged to do more ahead of the 2021 growing season.

Agriculture Minister Ernie Hardeman launched the strategy Monday, promising millions in funding and issuing 35 recommendations aimed at helping the sector whose workers were hit hard during the first wave of the pandemic.

Several migrant worker groups said workers themselves were not consulted in the development of the plan and none of its safety recommendations are mandated by law.

The executive director of the Migrant Workers Alliance said without any binding enforcement, the plan will offer little protection for workers.

“What is the enforcement mechanism?” Syed Hussan said. “What is the complaints mechanism for workers when things are not happening? And what protections do they have when they raise their voices and about complaints?”

Justice for Migrant Workers spokesman Chris Ramsaroop called the document “biased” towards the agri-food companies and said the government is putting business profits over the health of workers.

“The government does not have workers' interests as their foremost priority,” he said in a statement. “The decades of systemic discrimination and oppression of migrant farm workers which are the causes of the COVID outbreaks are not addressed.”

Development of the strategy was launched earlier this year by Hardeman in partnership with the agri-food sector when COVID-19 outbreaks infected hundreds of farm workers, highlighting problems with their cramped living and working conditions.

Hardeman acknowledged that he had not consulted any migrant worker groups during the development of the document, but stressed that industry compliance with the recommendations will be high because the strategy was largely created with ideas from the agri-food sector itself.

“I can't emphasize this enough, everyone's number one interest is to keep the workers safe,” Hardeman said. “With safe workers, we have a productive industry, with sick workers, we don't have an industry at all.”

The province and federal government will direct $26.6 million towards health and safety measures to bolster pandemic workplace protections.

Ontario will also spend $25.5 million over the next three years to help farms increase infection control practices, worker screening, and cover equipment costs under the plan.

The strategy also recommends limiting workers to one job site and increasing communication with workers about their access to health care and employment services.

The document establishes a steering committee to continue to investigate a number of key issues, including addressing housing for workers.

During the first wave of the pandemic crowded bunkhouses where many workers live together were cited as a reason why the virus spread so easily.

The president of the Ontario Federation of Agriculture said it will be a challenge to ensure adequate housing is secured before the next growing season.

“I don't think we can get it all right for the spring of 2021 but we're going to try,” Keith Currie said.

“It's a plan towards the best case scenario. Do we need to look at renting more hotel rooms (or) keep fewer people in the same area for housing, those kinds of things.”

Currie dismissed the criticisms of the migrant worker groups, saying the temporary foreign worker program that brings them to Canadian farms has been around for 55 years and helped farmers establish relationships with employees who return to work every year.

“If you and I were treated like what the Migrant Workers Alliance is accusing us of treating workers, there's no way in heck I'm getting on a plane and leaving my country and going to a foreign one to work,” he said. “Certainly, if anyone knows of an employer who's not doing things right, we want to know because we want to deal with them.”

This report by The Canadian Press was first published Nov. 17, 2020.