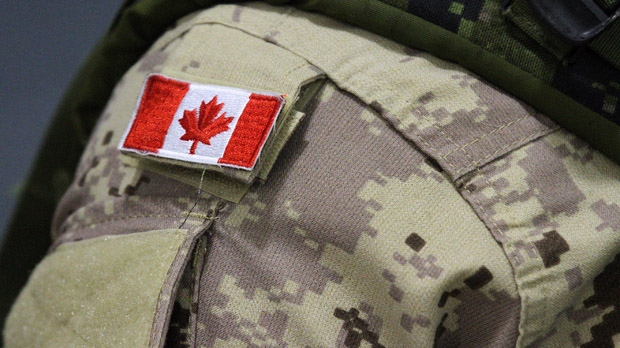 A Canadian flag sits on a members of the Canadian Forces leaving from CFB Trenton, in Trenton, Ont., on Thursday, Oct. 16, 2014. (The Canadian Press/Lars Hagberg)

OTTAWA -- The military launched an investigation last month into whether a reservist's connections to right-wing political parties meant his personal beliefs were offside with the values of the Canadian Forces.

Officer Cadet Darik Horn was identified during the election campaign by an anti-hate group as one of the founding supporters of the Canadian Nationalist Party.

Among other things, the party advocates for maintaining the “demographic status of the current European-descended majority,” via the return to highly restrictive immigration laws of the mid-20th century.

Horn also volunteered during the federal election for the People's Party of Canada, declaring himself a superfan of the organization.

The political party has also been subject to criticism for its restrictive stance on immigration and multiculturalism.

Horn has declined repeated requests for an interview.

None of Horn's public statements or involvement with either party made explicit reference to his work with the 32 Brigade, a Toronto-area reserve unit.

But after his name and photo were published, someone in the military who recognized him in media coverage flagged him to senior officials, and an investigation was launched.

Col. Dan Stepaniuk, the brigade commander, told The Canadian Press that while reservists are not prohibited from engaging in politics, there are rules governing their conduct. That includes notifying superiors if they intend to play an active role during campaigns.

Horn had not followed those rules, Stepaniuk said.

But the broader issue was the ideology behind his political connections, Stepaniuk said, and whether Horn was publicly promoting hatred or discrimination.

“Our interest in him was whether or not his beliefs align with Canadian Forces values and ethics,” Stepaniuk said.

The party does, however, remain the subject of a hate crime investigation in Saskatchewan for a video where Patron references the need to remove a “parasitic tribe” from Canada. The RCMP said Tuesday they've forwarded the results of that investigation to the Crown and are awaiting a decision on whether any charges will be laid.

The military's investigation - which included conversations with Horn - concluded with no disciplinary action taken. They would not explain why.

“The Canadian Armed Forces take matters related to values and ethical conduct very seriously and are committed to maintaining the integrity of the CAF by consistently applying the highest standards of behaviour, as established by our orders and regulations,” said Maj. Sonia Dumouchel-Connock, a spokesperson for 4th Division, which oversees Horn's brigade.

The investigation into Horn's affiliations ran parallel to ongoing work being carried out by the Department of National Defence probing dozens of members linked to hateful actions or groups.

A military-intelligence report last year identified 30 active service members as belonging to a hate group or having otherwise made discriminatory or racist statements. Six more have since been added to the list.

On Monday, department spokesman Daniel Le Bouthillier said while officials could not comment on individual cases, 16 members have been subject to a range of measures that include “counselling, warnings and disciplinary measures.”

“Some of the other cases are ongoing,” he said, adding: “Simply put, in any instance where information indicates discriminatory behaviour by a Canadian Armed Forces member, action is taken.”

-- with files from Lee Berthiaume