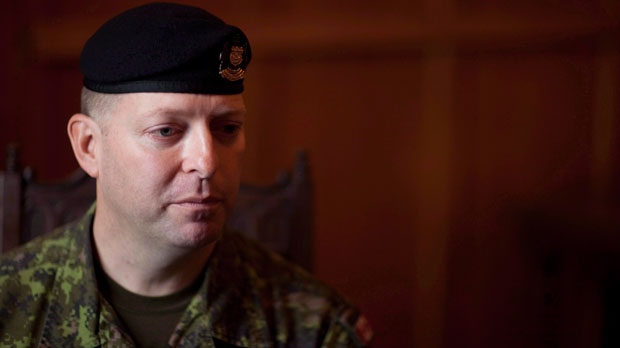 Capt. Darryl Watts speaks during an interview with The Canadian Press in Calgary Wednesday, Dec. 8, 2010. (Jonathan Hayward / THE CANADIAN PRESS)

CALGARY -- Prosecutors are seeking a harsher sentence for a veteran Canadian Forces reservist convicted in a deadly Afghanistan training accident.

Darryl Watts was found guilty in December of unlawfully causing bodily harm and negligent performance of military duty, but not guilty of manslaughter. He was demoted two ranks to lieutenant from major and given a severe reprimand.

Watts filed an appeal of both his sentence and conviction last month.

But the director of military prosecutions has filed a cross-appeal in the case. The prosecution had requested jail time for Watts during sentencing arguments as well as his dismissal with disgrace from the Canadian Forces.

"Yes, the Crown will be asking the Court Martial Appeal Court to substitute a greater punishment in lieu of the sentence imposed by the court martial," prosecutor Maj. Tony Tamburro confirmed in an email to The Canadian Press.

Cpl. Josh Baker, 24, died when a C-19 Claymore anti-personnel mine loaded with 700 steel balls peppered a platoon on a practice range in February 2010. Four other soldiers hit by the blast were seriously injured.

The prosecution argued during the trial that Watts, who was the platoon commander, didn't enforce safety standards and abdicated his duty as leader when he handed over responsibility for safety on the range to Warrant Officer Paul Ravensdale.

Watts argued that he had never been training on the C-19 and as a result was not qualified to be in charge.

His lawyer, Balfour Der, argues the judge should have allowed the jury to consider Watts's lack of experience in the use of the C-19 in determining whether he was negligent.

The day of the accident, the range was divided into four training sections. The first two tests of the anti-personnel mine went off without a hitch. But on the next one, the ball bearings fired backward, hitting Baker and the others.

Videos show several soldiers, including Watts, standing around watching the test. They are not inside armoured vehicles or standing behind them for cover, as set out in military safety regulations.

Two other soldiers have also been convicted for their roles that day.

Christopher Lunney pleaded guilty last Sept. 13 to negligent performance of duty for failing to ensure Watts was properly qualified on the C-19. He said he had assumed that to be the case, because of Watts's rank at the time. Lunney was demoted one rank to captain from major and received a severe reprimand.

The now-retired soldier was given a six-month suspended sentence. He also received a fine and demoted one rank to sergeant.