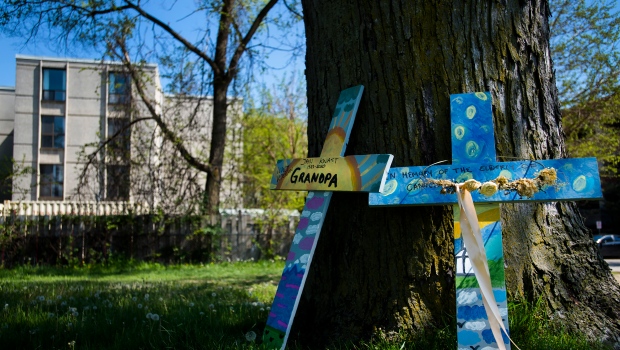 Crosses are displayed outside the Camilla Care Community centre marking the deaths of multiple people that occurred during the COVID-19 pandemic in Mississauga, Ont., on Tuesday, May 26, 2020. THE CANADIAN PRESS/Nathan Denette

The Canadian military claims that more than two dozen residents at a Toronto long-term care home died due to dehydration prior to their arrival amid the first wave of the COVID-19 pandemic while feces and vomit were reportedly found on the floors and walls of another, according to a newly obtained report.

The documents, which were submitted to Ontario’s Long-Term Care Home Commission and referenced in their final report on April 30, describe “heartbreaking” and “horrifying” conditions within two of the Toronto facilities. Among the most startling claims are allegations of neglect, malnutrition and a suggestion COVID-19 deaths at one home “paled in comparison” to general deaths.

The Canadian Armed Forces (CAF) was called in April 2020 to help seven long-term care homes in Ontario grappling with COVID-19 outbreaks. According to the commission’s final report, the military’s involvement was considered by the Ontario government in mid-April, but personnel didn’t start their shift until April 28.

“On April 17, 2020, Minister Fullerton wrote in her notebook: ‘Military plan needed, get them in within 24-48 hours ... Homes spiral down quickly.’ However, the military would not begin its first shifts in long-term care for another 12 days,” the commission said. “The logistics of requesting and deploying took time. This delay – like others before it – was tragic for those trapped in homes with uncontrolled outbreaks. By the time Canadian Armed Forces (CAF) arrived at the homes identified as most in need of attention, they found deplorable conditions.”

At Downsview Long-Term Care Home, located near Keele Street and Sheppard Avenue, a member of the Augmented Civilian Care Team (ACCT) reported that 26 residents died as a result of dehydration prior to the arrival of the military “due to the lack of staff to care for them.”

“They died when all they need was ‘water and a wipe down,’” the military said, adding that there was “large concern” with the timing of their arrival.

Sixty-five residents have died as a result of COVID-19 at Downview Long-Term Care Home, according to provincial data. As of Monday, there is an active outbreak at this location, with fewer than five confirmed resident cases.

The report also said there was a persistent cockroach infestation at the home.

CTV News Toronto has reached out to Gem Health Care Group, who owns Downsview Long-Term Care Home, for comment but has yet to hear back.

A separate document outlines the conditions military members were exposed to at Hawthorne Place Care Centre, located near Jane Street and Finch Avenue. The COVID-19 death toll at this long-term care home now stands at 51, however the military said they suspect “that COVID-19 related deaths pale in comparison to general deaths in this LTCF (long-term care facility) and feel the residents are dying from non-COVID-19 causes more than they should be.”

According to the document, the facility was in a “general state of disrepair” and members of the military were doubtful that proper standards were met prior to the pandemic.

When the military first arrived, they said they observed “feces and vomit on floors and on the walls” and that one member discovered two residents had dried feces under their fingernails. Members of the ACCT team described the home as “a shit pit,” while also saying that they found fungus, mould and cockroaches.

“The ACCT Team reported that there had been resident deaths due to dehydration and malnourishment,” the report noted, adding that residents had “given up on living” prior to the military’s arrival.

The Director of Communications at Responsive Group, an operating partner of Rykka Care Centres who owns Hawthorne Place, said that at no time were issues relating to mold, fungus, dehydration or malnutrition raised.

“All concerns that were raised were addressed immediately,” Nicola Major said in a statement. “Every death certificate issued in Ontario must include a cause of death and be signed by the attending physician. None of the death certificates issued for Hawthorne Place residents cite neglect, dehydration or malnutrition as a cause of death. There have been no investigations into any deaths at Hawthorne Place.”

This isn’t the first time a military report detailed horrendous conditions at Hawthorne Place Care Centre. The armed forces released a report on May 26, 2020 detailing the grim conditions they observed at the first five long-term care homes they attended. The report alleged that not only were there staffing shortages and lack of personal protective equipment (PPE) at the homes, but also that there were bug infestations, old food trays stacked inside resident rooms and that patients were observed “crying for help with staff not responding.”

Following the release of the report, Major said that Hawthorne Place conducted its own investigation and cooperated in an inspection by the Ministry of Long-Term Care.

“Both the Ministry of Long-Term Care’s follow up inspection as well as our own investigation found many instances where allegations were not shared with Hawthorne Place’s leadership team at the time, could not be substantiated, or members of the CAF could not recall a date or time an incident occurred,” Major said on Monday.

“We remain committed to providing a safe environment for our residents and staff, and Hawthorne Place continues to follow all new and ongoing infection prevention and control measures as directed by the province in consultation with Public Health.”

There is no longer a COVID-19 outbreak at Hawthorne Place Care Centre.

Speaking at Question Period on Monday morning, Government House Leader Paul Calandra has said that Ontario’s chief coroner is investigating all long-term care deaths and that “once that documentation has been received and thoroughly reviewed by both the coroner and by the ministry, we will be acting on recommendations that we received.”

Since the beginning of the pandemic, 3,931 long-term care residents have died as a result of COVID-19.