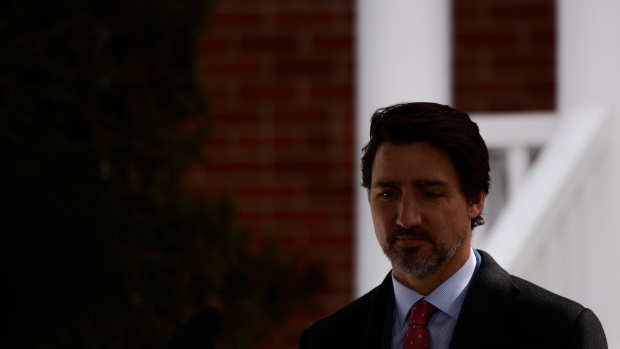 TORONTO -- The military is moving into northern Quebec at the province's request to help remote communities cope in light of the COVID-19 pandemic, Prime Minister Justin Trudeau said on Friday as political and health leaders urged Canadians to avoid leaving home unless necessary.

Latest figures indicate close to 12,000 Canadians have contracted the virus. Of those, 152 have died, but the numbers could be much higher given gaps in reporting methods.

Ontario was set to release its worst-case projections for the COVID-19 pandemic later in the day but its known caseload continued climbing, with 462 more cases and 14 more deaths reported. The province has now seen 3,255 cases and 67 deaths.

British Columbia has previously projected its worst case: 17 major hospitals would be short 182 intensive care beds and at least 38 ventilators but has said distancing measures appear to have slowed the spread.

In an interview late Thursday with The Canadian Press, Health Minister Patty Hajdu said her estimate from three weeks ago that between 30 per cent and 70 per cent of Canadians will likely become infected hasn't changed.

"Having 70 per cent of people get COVID is not the end of the world," Hajdu said. "It is, though, if it all happens at once and that's what we're trying to prevent."

At the moment, Canada's death rate stands at about one per cent of those who've tested coronavirus positive.

Experts say the flu-like illness poses a threat to the elderly and those with compromised health. The best way to curb the spread and ease the burden on an already stressed health-care system is to wash hands frequently and stay at least two metres away from others. Hospitals have reported shortages of personal protective gear for medical staff, while front-line doctors fret about having to choose who lives and who dies owing to potential shortages of crucial ventilators.

In tribute to health-care personnel, all ships in B.C. waters will sound their horns at 7 p.m. local time. Toronto's CN Tower has been lighting up blue in a similar show of solidarity, while people in other places have taken to banging on pots or pans to show their support.

The pandemic -- in particular the stay-at-home measures implemented to try to mitigate its spread -- has taken a brutal toll on the economy and jobs.

Trudeau said the government would provide additional aid to low-income people through the GST credit this month rather than next. Qualifying adults will receive up to $300, plus $150 for each child.

To help cushion the financial blow, the country's six largest banks have deferred more than 10 per cent of the mortgages in their portfolios for up to six months.

The Canadian Bankers Association banks had received almost 500,000 requests for deferrals or to skip a payment. However, interest on the deferred payments is expected to accrue during the deferral phase, meaning consumers will eventually have to cover the amount.

Globally, the pandemic has now infected more than one million people and killed close to 55,000, according to latest official tracking figures. China, where the virus is believed to have originated, has gradually been seeing life return to normal after draconian lockdown measures curbed the spread.