Residents, businesses and government buildings are turning off the lights to celebrate Earth Hour across the GTA as part of a global movement to raise awareness about climate change and energy conservation.

According to organizers, millions of people in more than 150 countries are participating in this year’s Earth Hour, which is being held Saturday from 8:30 p.m. to 9:30 p.m. local time.

Toronto Hydro said the city’s electricity drop during Earth Hour was 205 megawatts, the equivalent of approximately 92,000 homes being taken off the power grid.

Held annually in March, the symbolic event is an international call for urgent action on climate change, as it encourages people to cut back on their energy consumption on a daily basis to reduce their environmental impact.

In Toronto, the CN Tower and the Air Canada Centre dimmed their exterior lights for an hour, and a number of households and businesses went dark.

Candles, if used, should be 100 per cent beeswax or soy candles, which are made of natural products and are gentler on the planet, and they should not be left unattended, according to the website EarthHour.org.

The best year was 2009, when there was a 15 per cent drop in consumption, Bruckmueller told CP24.

To coincide with Earth Hour, the World Wildlife Fund, a co-founder of the movement, is holding a celebration in Roncesvalles Village, starting with a lantern walk at two meeting points – Grafton Avenue Park and Revue Cinema.

The lantern walk concludes at Wright and Roncesvalles avenues, where a free, family-friendly concert is being held.

According to the WWF, the event uses 100 per cent green electricity with energy-efficient LED lights.

Elsewhere in Ontario, the colourful lights behind the falls at Niagara Falls were turned off for an hour, and the provincial government is turning off the lights at about 70 of its buildings.

Across the globe, lights will be turned off and/or or dimmed at landmarks including New York’s Times Square and Empire State Building, the Las Vegas strip, and, for the first time, Moscow’s Kremlin and Red Square.

About 7,000 cities and towns are expected to take part in Earth Hour 2013, which is in the seventh year.

The movement began in Sydney, Australia in 2007, when more than two million individuals and 2,000 businesses switched off their lights for one hour. Toronto was the first Canadian city to participate, when it signed on in 2008.

Meanwhile, Ontario’s government is encouraging people to follow these every-day measures to conserve energy and take pressure off the power grid:

Are you turning off your lights, hanging out by candlelight, attending the Roncesvalles Village celebration or taking part in other activities during Earth Hour? If so, send your Earth Hour photos to now@cp24.com or tweet them to @CP24. 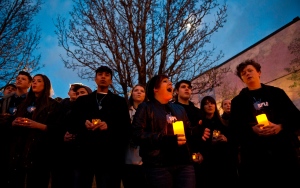 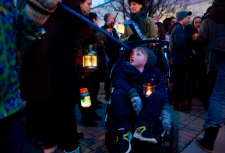 Three-year-old Brayden Elliot glances up as he waits for the WWF-Canada Earth Hour lantern walk to begin in Roncesvalles Village Toronto on Saturday, March 23, 2013. (Galit Rodan/ THE CANADIAN PRESS) 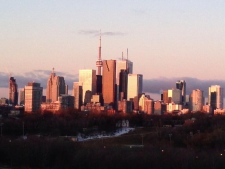