“Upon paying, if they’ve opted to pay with a debit card, at some point during that transaction from the point of sale, the taxi operator has been able to manipulate and swap the debit card and obtain the customer’s PIN number,” Toronto police Det. Michael Rogers told CP24 on Friday.

“After that the customer leaves thinking they’ve paid for the fare and they have their own debit card when in fact they’ve received a different one.”

“Right now it’s safe to say it’s someone with access to a taxi or to more than one taxi,” Rogers said. “The taxi companies we’ve been speaking to have been very cooperative.”

These typically occur at night when manipulating the cards isn’t as visible to the passenger, he explained.

The debit card fraud is also happening when someone flags a cab, police say.

“We haven’t had any occurrences when they’ve been ordered. They take their ride, usually short fares.”

“This alleged behavior is not representative of the thousands of hard-working, law-abiding taxi drivers in Toronto,” it said. “While police have stated that this is not connected with a specific company, we have offered our full cooperation in this matter.”

A spokesperson for the company said customers should insist on putting their own debit cards into the machine and retrieving it themselves once the transaction is complete.

Investigators said passengers should also be discreet with their PIN information when using taxis throughout the city. 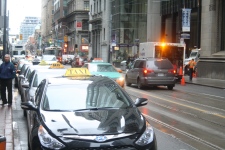 A taxi stand is shown in this file photo. (Chris Fox/CP24.com)