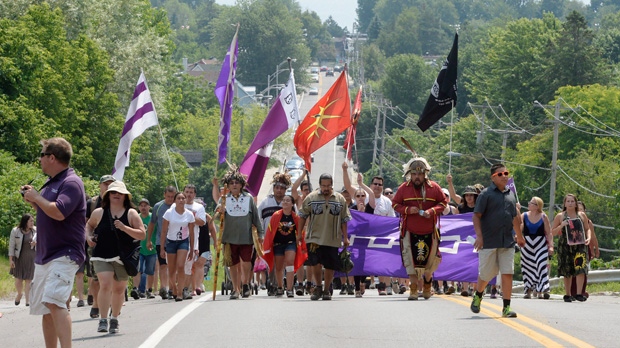 Mohawks from Kanesatake, Que., march to mark the 25th anniversary of the Oka Crisis, in Oka, Que., on Saturday, July 11, 2015. THE CANADIAN PRESS/Ryan Remiorz

OKA, Que. -- Twenty-five years after the beginning of the violent 78-day standoff between Quebec Mohawks and Canadian soldiers, the community of Kanesatake has not forgotten the Oka crisis or the reasons behind it.

Dozens of residents and other community members marched on Saturday along a tree lined dirt road, a path the Mohawks barricaded in 1990 to protest the proposed expansion of a golf course on what Mohawk leaders said was their land.

It was one of numerous events held to commemorate the anniversary of a crisis that began on July 11, 1990 when a shootout between Mohawks and provincial police resulted in the death of Cpl. Marcel Lemay in the town of Oka, about 45 minutes north-west of Montreal. The source of the bullet has never been discovered.

Saturday's march wound its way along the side of the golf course, past stop signs that Mohawk marchers said were the site of army roadblocks, where roughly 800 Canadian forces were called in after Lemay's shooting to encircle the community with barbed wire.

The crisis ended after 78 days of negotiations after both sides struck a deal: the barricades made of dirt and mangled police vehicles were to come down in return for the cancellation of the golf course expansion.

John Cree, one of the Mohawks leading the march, reminded the assembled people that the disputed territory remains unceded. He said much of the surrounding land, which the Mohawks claim, is under threat of development.

Many of the other speakers focused on conciliation and healing.

Francine Lemay, the sister of the slain police officer, said the crisis led her to eventually discovering the history of the Mohawks and the injustices they have suffered.

Since 2004 when she first visited the community and read -- and eventually translated into French -- a book on Mohawk history, she has dedicated her time to bridging cultural divides.

She has given herself the mandate of "peacemaker" in order to help build bridges between communities. She says she has seen an increased desire among Canadians to learn more about First Nations.

"People ask, explore, search, regret, act but much still needs to be done concerning recognition and reparation of wrongs," she said at Saturday's event.

The ceremony at Oka included both First Nations leaders and members of both municipal and provincial governments, including Aboriginal Affairs minister Geoff Kelley.

Kanesahtake Grand Chief Serge Simon shook hands with Oka mayor Pascal Quevillion. The two have agreed to jointly fight any development in the disputed land, known to the Mohawks as "the pines."

Quevillion said the gesture was just "officializing" a reconciliation that has been going on between the town of Oka and its Mohawk neighbors for years.

Simon said the anniversary brought back many strong emotions and "things I haven't thought about in 25 years," including the persecution of Mohawk activists by provincial police.

The day's events also included a feast, lacrosse game and other festivities.

The event continues Sunday, when the focus shifts on honouring the community's residential school survivors.