More masks, ventilators on the way as Canada's industrial response to COVID-19 ramps up 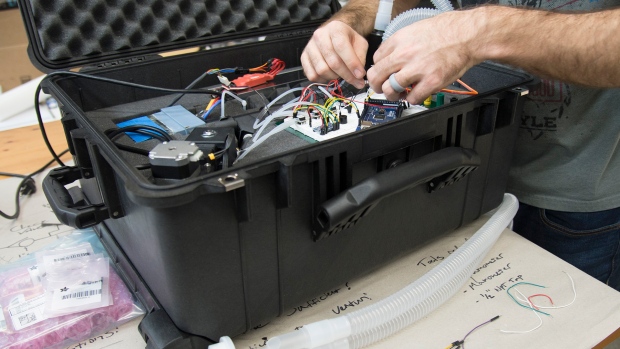 An engineer attaches the breathing tubes to a prototype of a emergency response ventilator in Vancouver Friday, March 27, 2020. The prototype ventilator which was designed and built in 8 days is waiting to get approval for use and if approved could be mass produced to help with the current shortage of ventilators worldwide. THE CANADIAN PRESS/Jonathan Hayward

As Canadians self-isolate in droves to help buy time for the health system to get ready for a potential deluge of COVID-19 cases, the federal government is buying supplies.

“As the items come in, they go out to the provinces,” Anand said in an interview.

The search continues for 4,000 more ventilators, and the government is allocating upwards of $2 billion to ensure more protective gear can be bought for the health-care industry.

The money and supplies from the federal government were announced as hospitals call for donations from the public, and medical professionals sound the alarm that they don't have what they need to protect themselves and treat the patients.

“Every day, every hour and sometimes every minute counts, so we encourage the federal government to ensure this critically needed equipment gets to the frontlines as soon as possible,” said Paul-Emile Cloutier, the president of the umbrella health-care organization HealthCareCan.

In Quebec, Premier Francois Legault warned Tuesday his province could run out of some supplies in three to seven days.

The premier said the shortage of equipment was due in part to orders that have not been delivered, as well as a high rate of use - a point that was echoed by Health Minister Danielle McCann.

“Right now, we're using 10 times more medical equipment than normal,” she said. “So what we used in one year, we're using in four weeks.”

The next two weeks are believed to be crunch time for Canada's efforts to curb the spread of the virus.

Though the number of new cases being reported daily is increasing, public health officials note that lags in testing mean those results are from infections dating back days.

So all eyes are on whether the aggressive physical distancing measures implemented in the latter half of March have gone far enough to halt a potential spike in infections that could in turn overwhelm the health-care system.

The ventilators are a key piece of equipment. COVID-19 is a respiratory disease, and while most cases are mild, it does affect the lungs.

Ontario's associate chief medical officer of health said that as of Tuesday afternoon, 291 people were hospitalized with COVID-19, with 125 in intensive care and 82 of them on ventilators. That is 21 more people on ventilators since Monday.

The orders being placed represent the maximum of what the government thinks is available, Anand said, rather than being linked to disease modelling of future demand. Excess inventory could be sold to other countries, or just stockpiled.

Some of the orders announced Tuesday were the result of a plea to Canadian industry from the federal government just a few weeks ago to pitch in and help produce badly needed goods.

Three contracts were initially signed between Canadian firms and Ottawa and the government announced five more on Tuesday.

Anand said the government has heard from upwards of 16,000 firms interested in helping.

Around 500 ventilators are coming from Toronto-based Thornhill Medical, which said Tuesday it expects to deliver some units next week. The firm also has a separate agreement to supply Ontario.

Doris Grinspun, the chief executive officer of the Registered Nurses' Association of Ontario, said the pivot to getting more made-in-Canada goods is essential - and encouraging - but the global hunt for supplies must continue.

“We are in the middle of the pack,” she said of Canada's efforts to get enough supplies compared to other countries.

How much gear Canada will ultimately need rests in part on Canadians themselves, Prime Minister Justin Trudeau said Tuesday.

“We will need more masks, ventilators and testing kits, but how many more we need depends entirely on you,” Trudeau said during his daily briefing.

“If you stay home and follow public health recommendations, you can slow the spread.”