More than 1,100 anti-Asian attacks reported in Canada one year into COVID-19 pandemic; 10% involved coughing or spitting 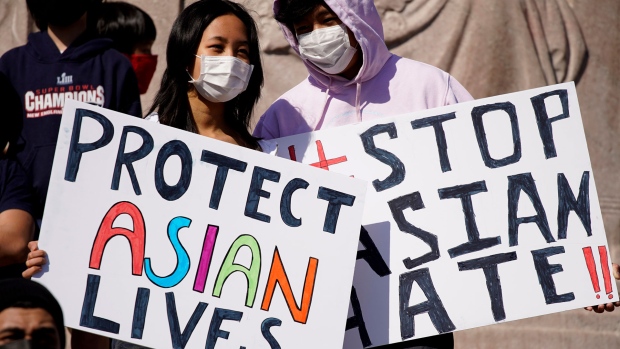 People hold signs as they attend a rally to support Stop Asian Hate at the Logan Square Monument in Chicago, Saturday, March 20, 2021. A diverse crowd gathered to demand justice for the victims of Atlanta, Georgia spa shooting for an end to racism, xenophobia and misogyny. (AP / Nam Y. Huh)

More than 1,100 attacks against Asian Canadians have been reported one year into the global COVID-19 pandemic, and 11 per cent of those incidents contained violent assault or unwanted physical contact, according to a new report.

The CCNC, along with partner organizations, gathered data from Asian Canadians who reported incidents online from Mar. 10, 2020 to Feb. 28, 2021.

During this time period, 1,150 cases of racist attacks against Asian Canadians were reported, with 507 incidents logged between Jan. 1 and Feb. 28 alone.

Many Asian individuals around the world have encountered racist remarks and attacks after the novel coronavirus was first discovered in Wuhan, China in Dec. 2019. The global COVID-19 pandemic was then declared by the World Health Organization in Mar. 2020.

“Asian Canadian communities not only face the challenges of COVID-19 (the social, economic and health implications of which has disproportionately impacted racialized communities) but also the added racism that sees our communities as somehow responsible for COVID-19 and its horrific damages,” the report states.

Eleven per cent of all reported incidents contained a violent physical assault and/or unwanted physical contact, while 10 per cent of all attacks included a person being coughed at and/or spat on, according to the CCNC.

Public spaces are the most common areas for racist attacks against Asian Canadians, followed by spaces in the food sector, including grocery stores and restaurants, which account for almost one-fifth of all racist attacks.

Forty per cent of all incidents occurred in Ontario, while 44 per cent happened in British Columbia.

“We must remember that behind every number is a human being whose life, and the lives of

those around them, have been changed forever by the gross violation of their rights. Collectively and individually, these racist incidents have resulted in deep and long-lasting impacts on the Asian Canadian community as a whole,” Avvy Go, clinic director of the Chinese & Southeast Asian Legal Clinic said in a statement.

The CCNC listed four key steps that they recommend to address discrimination against Asian Canadians, including:

The organization says these recommendations need to be implemented immediately to support Asian communities against an increase in anti-Asian racism.

The CCNC’s report comes a week after a deadly shooting killed eight women, including six Asian women, in Atlanta, Georgia.

Although anti-Asian racism is an issue in the U.S., the CCNC says it continues to be a serious issue in Canada as per capita reports of incidents continue to outpace the U.S., which reported at least 3,795 cases throughout the first year of the pandemic.