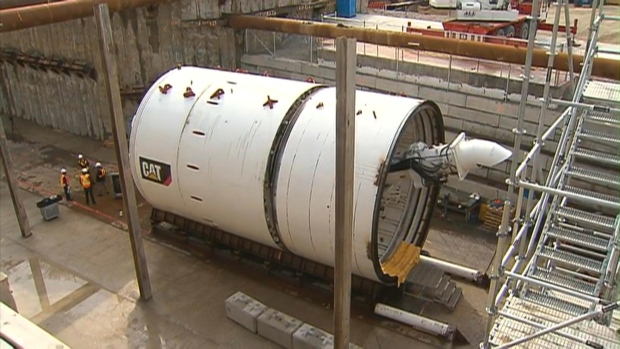 A tunnel-boring machine sits at the site of the Eglinton-Scarborough Crosstown LRT construction project.

A new report says that more than 40 per cent of the transit projects originally earmarked for Toronto, Hamilton and the GTA between now and 2033 are still not funded.

Of that, funding has been found for $39.3 billion, the report says.

Committed funding will allow about 519 kilometres of new transit to be built.

The report’s authors call for new taxes and fees to cover the transit capital cost gap.

“Numerous expert studies and reports have identified revenue tools that have good potential, including an increase to the HST dedicated for transportation, an increased gas tax dedicated to transportation, a new parking space levy, or broadly-based pricing like is being tested in the USA today.”

The report uses the list of rapid transit projects found in the Big Move, a 2008 document that outlined the transportation needs of the region looking 25 years in the future.

But with all the new transit being built, maintenance costs are sure to climb.

The report says that if all proposed projects were built, the full menu of transit projects in the Big Move would cost an additional $4.6 billion to operate, maintain and refurbish by 2042.

The report was commissioned by Move the GTHA, a group supported by environmental groups, transit advocates and public agencies such as Toronto Public Health and the Toronto Atmospheric Fund.