More than 5 million Ontario residents are boosted now, but the province is still struggling to hit its vaccination targets

More than 5 million Ontario residents have now had a booster shot to protect against COVID-19, but the latest numbers show the province has struggled to pick up the pace of its vaccination efforts.

In early December health officials set a goal of vaccinating between 200,000 to 300,000 people per day and managed to do so for several days in late December.

But that number plummeted over the holidays and has not gone back up since.

On Jan. 6. Chief Medical Officer of Health Dr. Kieran Moore said that he is "in no way satisfied" with doing just 180,000 or so doses per day.

However daily vaccination totals in the province have averaged around 153,000 over the past week and the province has not reached a daily count above 200,000 doses since Dec. 24.

In an email to CP24.com, the Ministry of Health said the goal remains handing out 200,000 to 300,000 shots per day, even though it has only reached that target on four days since it was set.

“Ontario is ramping up capacity to administer 200,000 to 300,000 doses per day based on demand,” the statement read. “In a few short weeks, Ontario has scaled up its vaccine rollout at incredible speed, and on December 22nd, Ontario administered 253,000 doses in a single day.”

In a virtual press conference Thursday afternoon, Moore said he was encouraged to be hitting around 150,000 per day.

“I really very much appreciate it, 150,000 Ontarians almost daily now are coming forward primarily for their third doses,” he said.

However he acknowledged that there is still “a significant amount of work to do yet” to get boosters into arms, particularly the more vulnerable 50+ age group.

Booster rates are below 36 per cent in all other eligible groups, with the lowest uptake among those 18-29 (just 23 per cent).

It is not entirely clear why the vaccination effort has stalled.

Toronto Public Health (TPH) told CP24.com Thursday that city-run clinics continue to run at maximum capacity and that they are adding appointments where possible to meet high demand.

While it has generally met with positive results by reaching out to specific populations, TPH acknowledged it has “observed some recent challenges to vaccination uptake.”

The agency said those challenges include having to respond quickly “to evolving provincial vaccination eligibility” such as for children 5 to 11 in November and boosters for those 18+ in mid-December.

“This required an immediate ramping up in City-run clinic capacity to meet demand, which has been implemented routinely since early December 2021,” TPH said.

The agency said it has also seen its efforts impacted by people testing positive for COVID-19 and having to cancel their appointments.

“Additionally, with the recent emergence of the Omicron variant and rapidly increasing case counts, attendance at clinics may have been affected where residents with vaccination appointments had to self-isolate after becoming ill or being exposed to the virus,” TPH said. TPH also cited vaccine hesitancy and vaccine access as “recurring themes” throughout the vaccination rollout process in the city and said that it has been trying to understand those barriers better in order to “successfully engage with residents regarding the value of vaccination.”

Anecdotally a number of young people have wondered whether there is any benefit to getting a third shot. The latest vaccine data from the province show that just about 23 per cent of those 18 to 29 have received a booster shot, despite being able to book an appointment through the provincial booking system since December 20. That compares to a rate of nearly 32 per cent for the 40-49 age group, which became eligible at the same time.

Meanwhile, critical care doctors at the University Health Network told CTV News recently that they are seeing a high number of unvaccinated young people in their ICUs, indicating that they are still susceptible to the Omicron variant.

“In our units we're seeing about two-thirds of our patients are relatively young, unvaccinated and are showing up with severe disease,” critical care physician Niall Ferguson said.

Asked about a possible drop-off in demand for vaccines in general, the ministry pointed to the fact that some parents have expressed hesitation about getting their children vaccinated.

“We understand that some parents might be hesitant to get their child vaccinated and may have question (sic) about the vaccine,” the ministry said. “That’s why we are working closely with public health units, children’s hospitals, children’s services and other health experts, including partnering with SickKids to allow for confidential, convenient and accessible vaccine consultation services for children, youth and their families.”

TPH said that it has a number of clinics planned for areas in the city which have seen lower vaccine uptake, as well as school clinics for students and education workers, extensive community outreach and special event vaccination clinics.

Still, the vast majority of daily vaccine doses handed out in the province are now booster shots.

The ministry reiterated Thursday that it previously issued a call for help from those able to help administer shots at clinics. It was not clear how successful that call was.

The ministry also pointed to reports of brand preference as a possible reason why fewer appointments are being completed daily. The City of Toronto has estimated that people walking away from appointments because they prefer one vaccine brand over another could account for one to two per cent of uncompleted appointments.

Asked Thursday whether Ontario might consider changing the definition of fully vaccinated to mean having had three doses, Moore said the government would first want to review data on protection levels after two and three doses, respectively.

“That is one option that other jurisdictions are reviewing, but we haven't made that review as of yet, or provided it as an option to government,” Moore said. “But we will review what works around the world in terms of promoting vaccination and ensuring safety in public.” 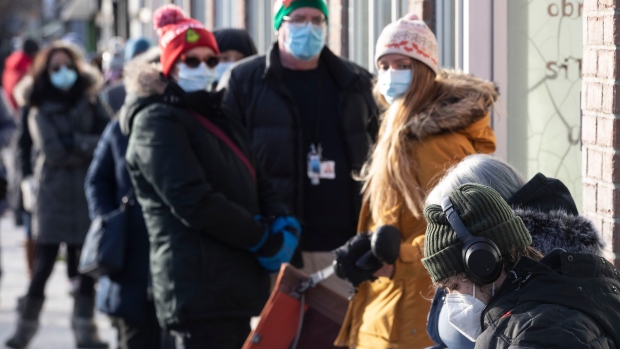 A healthcare worker and volunteers watch as Ontario Premier Doug Ford visits a vaccine clinic for Purolator employees and their families at the company's plant in Toronto, Friday, Jan. 7, 2022. THE CANADIAN PRESS/Chris Young