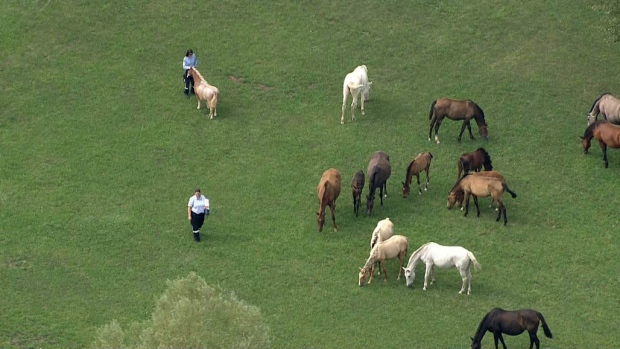 At least a dozen horses that briefly blocked a roadway in the Township of King on Thursday afternoon have been rounded up.

York Regional Police say that the horses were spotted by a passerby on Jane Street near 17th Side Road at around 12:55 p.m.

The person who called it in also managed to get the horses off the road and into a nearby field before officers arrived, police say.

Staff with Vaughan Animal Control were called to the scene to help monitor the horses while police went door to door in the area looking for their rightful owner.

At around 2 p.m., police confirmed that the owners of the horses had been located and that they would “be working to get their horses safely back to their pasture.”

It is unclear how many of the animals are in the area, however footage from CP24’s chopper appears to show at least 19 horses and two donkeys in the field on the east side of Jane Street.

Watch your speed and don't hoof it down Jane Street, especially in the area of 17th Sideroad in King. Officers are responding to a report of 12 to 20 horses on the roadway.