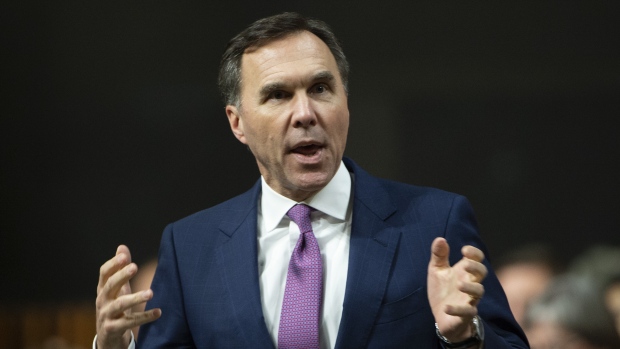 Minister of Finance Bill Morneau responds to a question during Question Period in the House of Commons Monday February 4, 2019 in Ottawa. THE CANADIAN PRESS/Adrian Wyld

OTTAWA -- Federal Finance Minister Bill Morneau will provide his first update for Canadians today on the state of the economy -- and the government's books -- since the October election.

The update comes as Morneau prepares to host provincial finance ministers for two days of talks this week, in which the amount of federal assistance provided to provinces dealing with economic downturns is expected to figure prominently.

Morneau's fall fiscal update will include forecasts on how much the government expects to raise in revenue, how much it expects to spend and whether the federal deficit will be bigger or smaller than the $19.8-billion the Liberals predicted in their March budget.

The update will also reveal how much money Ottawa will transfer to so-called have-not provinces and territories in the coming year to help them provide the same level of services to Canadians as those provinces that are better off.

Alberta, Saskatchewan and some other provinces have been angry at how such assistance is calculated, and are pushing for Ottawa to expand a federal program set up to help provinces that are dealing with a sudden economic downturn.

Morneau has agreed to discuss the matter during his meeting with provincial counterparts.

This report by The Canadian Press was first published on Dec. 16, 2019.