Most past allergic reactions not valid reason for COVID-19 vaccine exemption: allergists 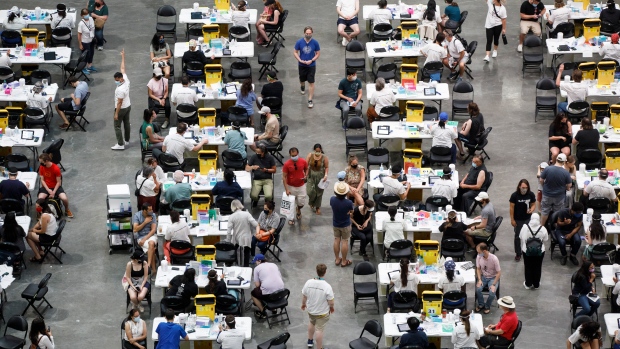 Whether people have held off on getting vaccinated because of a past reaction, or are seeking an exemption to inoculation mandates, Hanna said a previous allergic response doesn't mean you can't get your shots.

Allergists across the country have safely inoculated most patients who come into their clinics, regardless of allergy history, she said.

“Be it as an excuse or a misunderstanding or some miscommunication there, we are certainly getting a lot of referrals because of (vaccine rules),” said Hanna, an assistant clinical professor at McMaster University.

“Most of the time, it isn't reason for exemption.”

Hanna said many of the patients she assesses are concerned about previous reactions to non-COVID-19 vaccines. But because the mRNA jabs from Pfizer-BioNTech and Moderna are different from typical inoculations, those past reactions usually don't come up again.

Other patients are concerned about receiving a second mRNA dose if they had an adverse reaction to the first. But she said many patients mistake common non-life threatening reactions - including rash or swelling at the injection site - for an allergy.

“It's only the very, very few patients that have had a systemic reaction, typically within 15 to 20 minutes of receiving the first dose, that we want to be careful about,” Hanna said. “Most of the side effects that we expect with a vaccine, those are not contraindications for exemption.

“And sometimes you need an allergist to help clarify it.”

Allergists assess patients in their specialized clinics, taking a full history to determine the severity of the previous allergy experience - and whether it was an allergic reaction at all.

The assessment can sometime include skin tests, where an ingredient of the vaccine is smeared on a small patch of skin, but Hanna said every patient's appointment will be different.

Dr. Samira Jeimy, a clinical immunology and allergy expert with Western University, said even those who experienced what they perceived to be strong allergic reactions could be mistaken.

Some non-allergic reactions can include anxiety-related events that mimic allergic responses, she said, including hyperventilation, fainting and even symptoms that look and feel like anaphylaxis - a severe, potentially life-threatening reaction where blood pressure drops and airways narrow making it hard to breathe.

“Things that mimic anaphylaxis are far more common than actual anaphylaxis,” Jeimy said. “One example is vocal cord dysfunction, where somebody could actually have their vocal cords slammed shut (when) nervous.”

The Canadian Society of Allergy and Clinical Immunology says the risk of systemic allergic reactions, including anaphylaxis, is extremely rare. Studies suggest the estimated annual rate of anaphylaxis in Canada is approximately 0.4 to 1.8 cases per one million doses of vaccines administered.

According to Health Canada's review on adverse vaccine reactions, 307 cases of anaphylaxis have been reported in the country - out of more than 56 million COVID-19 doses administered.

Jeimy said her London, Ont., clinic has been able to vaccinate “about 99 per cent” of people coming in with allergy concerns. That includes those who have had real, severe reactions to a first COVID-19 vaccine dose.

Allergists work around this by giving someone with a confirmed allergy small amounts of the dose, separated by 15- to 30-minute observation periods, until dosing is done.

Jeimy said it can take hours to complete a graded administration for extreme cases.

Canada's National Advisory Committee on Immunization says COVID-19 vaccines shouldn't be offered “routinely” to those who had severe allergic reaction following the first dose. If a risk assessment deems the benefit of vaccination outweighs allergy risks, NACI says a different vaccine than the one that caused the initial reaction - either AstraZeneca's viral vector jab or the mRNA products - may be used to complete the two-dose series.

Jeimy said that her clinic carries doses of AstraZeneca for emergency situations but she hasn't had to use them. Instead, most people can safely complete a two-dose mRNA series.

Jeimy said allergists aren't certain which component of the mRNA vaccines cause severe allergic reactions in a small number of people. But PEG, or polyethylene glycol, is “currently thought to be the culprit.” She added PEG allergies on skin tests don't necessarily “correlate to vaccine tolerance,” however.

PEG is a common ingredient in cosmetics, skin-care products and some medications, including Tylenol and cough syrup, Jeimy said. So people with PEG allergies likely know they have it long before getting an mRNA vaccine.

NACI says a COVID-19 vaccine “should not be routinely offered to individuals who are allergic to any component” of the jab.

Jeimy urges people to ask a doctor for clarification before swearing off COVID-19 shots.

“I don't think it's helpful to preemptively avoid things because of a fear of a reaction,” she said. “You have a far greater risk of COVID-19 infection.”