Motorcyclist killed after colliding with transport truck in Brampton: police

The crash happened near Rutherford and Glidden roads at around 3:30 a.m.

Police said a motorcycle and a transport truck collided in the area and the male motorcyclist suffered critical injuries.

"Emergency personnel responded and were doing life-saving efforts on the motorcycle driver, who was then transported to a local hospital," Peel Regional Police Insp. Stephen Duivesteyn told reporters at the scene.

He was subsequently pronounced dead in hospital.

The motorcycle, Duivesteyn said, incurred "severe damage" as a result of the crash.

He could not confirm reports that the motorcycle caught fire following the collision.

"I don't know if that actually has transpired but once our investigators come on scene, that is something they will look at. A thorough examination will be conducted,"  Duivesteyn added. "The impact appears to be quite significant." 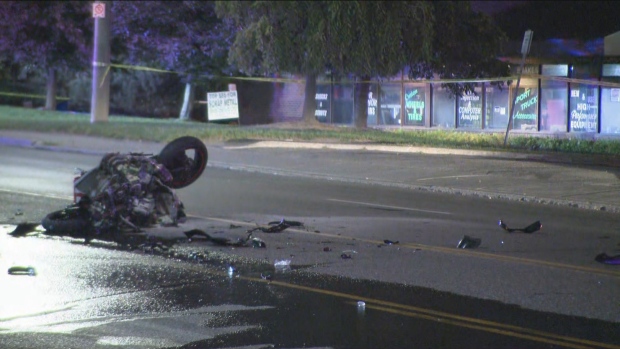 The name of the motorcyclist has not yet been released.

Duivesteyn confirmed that there was a diesel spill in the area following the crash and the Region of Peel is on scene monitoring the situation.

"Fire personnel were on scene and they were able to (take) the necessary precaution to keep any diesel from going into the sewer," he said.

Northbound Rutherford Road is currently closed north of Steeles Avenue, between Glidden Road and Clarence Street, for the police investigation.

The Major Collision Bureau will be leading the investigation into what caused the fatal crash.

"If anybody witnessed this accident or has any dash cam or any video whatsoever, please contact the Peel Regional Police Major Collision Bureau,"  Duivesteyn said.  "That information or evidence would be very vital to our investigation."