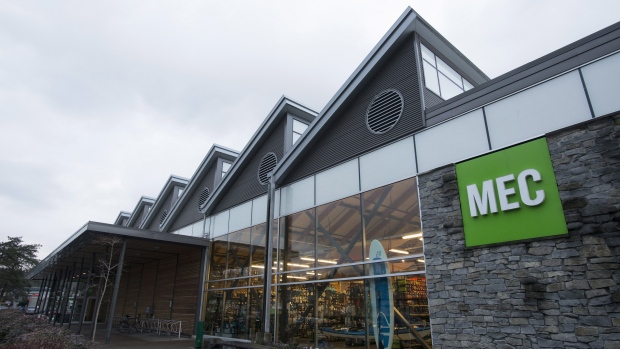 The outside of a Mountain Equipment Co-Op is seen in North Vancouver, Monday, Dec. 9, 2017. THE CANADIAN PRESS/Jonathan Hayward

VANCOUVER - Mountain Equipment Co-op says its board of directors has unanimously approved a deal in which a Los Angeles-based private investment firm will acquire MEC's assets, including the majority of its retail stores.

Vancouver-based MEC says the transition from a co-operative structure to a subsidiary of Kingswood Capital Management is needed to ensure a stable future for the business.

The retailer said it has been granted court protection under the Companies' Creditors Arrangement Act (CCAA), allowing it to continue operating e-commerce and retail stores while the transaction and other elements of the plan are completed. It says it will accept gift cards and honour warranties during this period.

No financial details were disclosed.

Kingswood managing partner Alex Wolf said in a statement he is “honoured” to work with his new Canadian operating partners and that his company is committed to continue to “inspire and equip” Canadians who enjoy an active outdoor lifestyle.

MEC chair Judi Richardson said the “difficult decision” to sell MEC follows an extensive examination of options after the company was unable to overcome years of persistent financial challenges made worse by the impact of the COVID-19 pandemic.

Richardson said in an interview that although she could not speak for Kingswood's future plans, the due-diligence discussions between MEC and Kingswood had indicated Kingswood was the bidder most likely to preserve the highest employment levels and number of stores.

During the creditor protection process, Kingswood will negotiate with landlords on preserving the footprint of at least 17 stores, she said.

“With the announced sale, we've essentially preserved a high number of stores - so a large bricks-and-mortar footprint across Canada - and will also preserve a number of employment opportunities for our current employees. And we believe that we're really paving the way to the possibility of another 50 years of legacy,” Richardson said.

Although the deal represents the second CEO shakeup in as many years, Richardson said she is hopeful that members of MEC's current executive leadership will stay with the company (even if the elected board does not). Richardson said that during discussions with the board, new CEO and board chairman Claus proved to be an “outdoor person” and also has co-op experience, having led Co-Op Atlantic as chief executive.

“We did bring in new leadership under Phil Arrata. He joined in July of 2019, and he and the team put a turnaround plan together - and they were executing, and executing well, on that turnaround strategy,” said Richardson.

Richardson said the company will likely continue with some of the plans that were already in place, including re-evaluating the types of products offered and the number of products offered in each category, as well as the supply chain. The creditor protection process will also help reduce the company's debt, she said, as well as high “fixed costs” and inefficiencies.

“Kingswood themselves are putting some financial resources into this transaction, but they are not operating the business. And so they have partnered with (Claus)... and he's very passionate about MEC,” said Richardson.

“I do believe that they have every intention of carrying on with the MEC purpose.”

During the transition from a co-operative to a private company, Richardson said, members would have to claim themselves as creditors to stake a claim on their $5 shares unless Kingswood decides on an alternative way to compensate the members (who become ordinary customers of the private business).

Alvarez & Marsal Canada Inc. has been appointed by the court as the monitor under the CCAA proceedings.

The transaction remains subject to regulatory approvals and is expected to close in the fourth quarter of 2020.

- With files from Anita Balakrishnan in Toronto.

This report by The Canadian Press was first published Sept. 14, 2020.