A steady stream of visitors continues at a vigil in front of the North York apartment building where 3-year-old Elijah Marsh wandered off into the cold Thursday to tragic consequence.

People gathered outside the building Saturday morning to hold hands and sing prayers in the falling snow in front of an ever-growing tribute of cards, teddy bears and flowers.

“It’s just one of those humbling experiences to see that something like this can bring people together,” said Maureen Chen-Daley, a pastor who led prayers outside the building.

She said she was amazed to see people not just from the immediate community, but from all over the city, as well as other parts of the GTA stopping by to pay their respects.

Marsh was found without vital signs just a few hundred metres form the apartment where he wandered off early Thursday. He died in hospital a few hours later.

Speaking with reporters at the vigil Saturday, Mayor John Tory said he came to represent all those in the city who have been touched by the story.

“I’m a father and a grandfather and this kind of thing could happen to any of us where there’s a terrible accident like this that befalls a little boy,” Tory said. “You just can’t imagine it happening to your own family. So I’m here as the mayor to be here for all the people who couldn’t be here but thought the same thing, that it could happen to them.”

After the word went out that Marsh was missing thousands of people shared his picture on social media and some even went in person to help look for him.

On Friday, one of the volunteer searchers who found the little boy broke down as he told CP24 why he and his fellow striking steel workers decided to go look for Elijah.

“We were sort of dressed for the cold so we knew how cold it was,” David Elines said through tears. “So that’s why we thought we should go and help.”

Elines said he had hoped they would locate the boy playing video games without a care somewhere, but what he found left him devastated.

“He looked just peaceful in the snow. That’s all you can say, I guess,” he said, breaking down.

Following the boy’s discovery Thursday, an online fundraiser was started online with the aim of raising $20,000 to help pay for the boy’s funeral. The goal was reached and surpassed early Friday morning. With one day left in the online campaign, donations have continued to pour in. As of Saturday afternoon, over $150,000 had been raised.

“I think this is an incredible example of a crowdfunding campaign,” Ryerson University Social Media Lab director Anatoliy Gruzd told CP24. “I haven’t personally seen an example with that speed with that many people donating.

“I think people know that they can relate to this particular story and they want to express and help support the family.”

A trust fund has also been set up to make donations. Money can be donated directly to the family through Scotiabank using transit number 01601, institution number 002 and account number 016020285323. 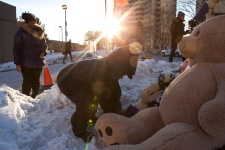 A young boy lays flowers at a memorial for Elijah Marsh on Friday, February 20, 2015. The three-year-old boy died Thursday afternoon after wandering away from his North York home in the early hours of the icy morning dressed only in a T-shirt, boots and a diaper. (Chris Young /The Canadian Press)