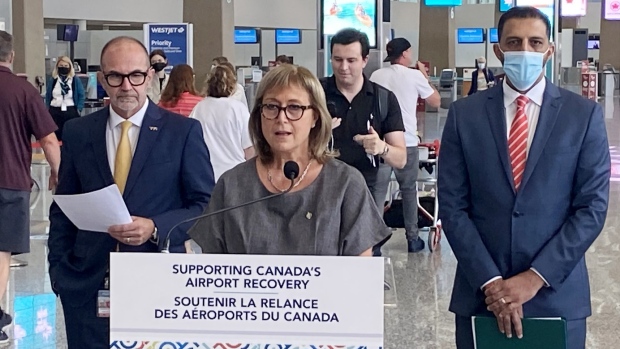 A member of Parliament says Ottawa may have underestimated Canadians' desire to travel when planning for a return to normal following the end of most pandemic restrictions.

Airlines and airports have been grappling with a surge in customers this summer, compounded by staffing shortages affecting both carriers and federal agencies.

Last month, due to a glitch, the ArriveCan app instructed about 10,200 travellers to quarantine for 10 days when they didn't have to.

Annie Koutrakis, the parliamentary secretary to the minister of transport, told reporters in Calgary on Tuesday that planning for a return to normal fell a bit short.

"The data shows us that we were not anticipating everybody to start travelling to the degree that they did. It's not like we were waiting and not planning behind the scenes to be ready for it. It's just more could have been done."

Koutrakis said this is the first time the government has gone through a pandemic and there are lessons to be learned.

Transport Minister Omar Alghabra was grilled about the delays at a House of Commons committee last week.

Conservative MP Melissa Lantsman asked him if the federal government bears any responsibility and Alghabra replied: "I blame it on COVID." He pointed to labour shortages as the primary contributor to the delays.

Koutrakis said data indicates that abandoning the ArriveCan app would increase delays and bottlenecks, and removing the mask mandate would not reduce wait times.

A statement from Alghabra's office said the government recognizes the airport delays are frustrating for travellers and he has met with airlines, airports and the public to address concerns.

It said progress is being made with the number of cancellations dropping. In addition, over the second week of August, less than two per cent of international arrivals at Toronto were held on the tarmac due to congestion as compared to 18 per cent during the first week of May.

It adds 87 per cent of passengers are waiting less than 15 minutes to go through security, up from 63 per cent in early May.

There were no representatives from any of the airlines at the announcement.

However, Bob Sartor, the president and CEO of the Calgary Airport Authority, said the carriers are suffering through the same problems in hiring enough staff.

"The reality is, they are facing, to a greater extent, issues that we face at (the Calgary airport) and that is the need for additional staffing," Sartor said. "They did what we did as an airport and they reduced significantly their staffing during the pandemic."

"If we ever have one of these black swan events — and I pray we do not — we need a consolidated aviation sector restart plan."

This report by The Canadian Press was first published Aug. 23, 2022.