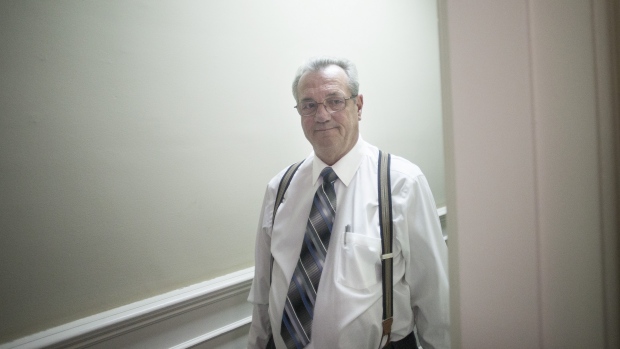 Ontario MPP Randy Hillier walks into his office in the Ontario Legislature, in Toronto to speak to journalists, on Tuesday, March 26, 2019. Hillier returned to Queens Park after being ousted from the Ontario PC Caucus. THE CANADIAN PRESS/Chris Young

Ontario MPP Randy Hillier has released a statement, but stopped short of apologizing after he appeared to make light of a Black cabinet minister’s own experience with racism earlier this week.

“On Monday night, June 1 2020, I wrote a two word tweet; like most two word tweets, there was little forethought and no reflection on how it may be perceived,” Hillier wrote in a post to Twitter on Thursday.

“Any tweet that requires an explanation is indeed a bad tweet; my tweet was insensitive and out of context and upon reflection and within minutes, I deleted it,” Hillier continued.

A number of Twitter users have since responded to the MPP’s statement calling for a formal apology.

The comments from the Independent MPP for Lanark-Frontenac-Kingston come after Ahmed Hussen, the minister of families, children and social development, was speaking with CTV Power Play host Evan Solomon on Monday.

The interview was about anti-Black racism and the protests that have gripped the United States following the police-involved death of George Floyd in Minneapolis, Minn.

Hussen said that he has experienced racism first hand, despite being a member of parliament and a federal cabinet minister.

"I have been followed in stores...my back gets up when a police cruiser comes behind me as I drive," says Min. Hussen, speaking about the daily reality of racism in Canada . #cdnpoli #ctvpp

"Instinctively, my back gets up when a police cruiser comes behind me as I drive," Hussen said Monday, while adding that sometimes gets followed by staff when he goes shopping.

The tweet has since been deleted but has been met with sharp criticism online and multiple accusations of racism.

Hillier’s response, which does not mention racism, attempted to contextualize his tweet.

“’Guilty conscience’ is near universal in its use, and we all intuitively understand that we all get nervous to some degree in the presence of the police or other authority. We slow down regardless of our speed while passing parked police care on the highway, we frantically search for vehicle registrations, insurance, and license if pulled over, we all have a guilty conscience to some degree,” Hillier wrote.

Hillier says he recognizes the tweet was a “disservice” to the “cause of understanding and resolving the unjust strife, legitimate grievances, and harmful divisions between people that we are seeing in the world right now and that we have seen historically.”