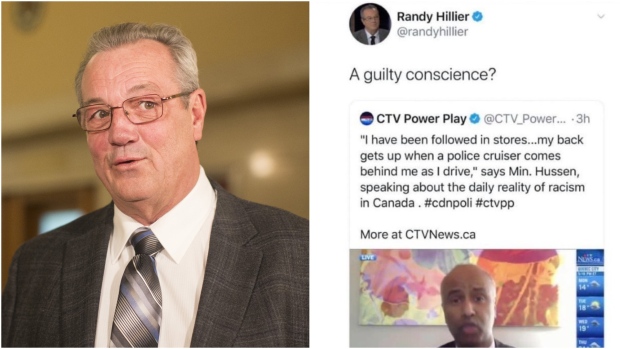 Ontario MPP Randy Hillier arrives at the Chamber at the Ontario Legislature in Toronto on Tuesday, March 26, 2019. (The Canadian Press/Chris Young/Twitter)

Veteran Ontario politician Randy Hillier has not apologized after appearing to make light of a black cabinet minister’s own experience with racism.

Ahmed Hussen, the minister of families, children and social development, was speaking with CTV Power Play host Evan Solomon on Monday. The interview was about anti-black racism and the protests that have gripped the United States following the police-involved death of George Floyd in Minneapolis, Minn.

"Instinctively, my back gets up when a police cruiser comes behind me as I drive," Hussen said Monday.

Hussen went on to say that he still gets followed around by store employees while shopping, despite being a member of parliament and a federal cabinet minister. The minister recounted one such instance where he was shopping for cold medicine with a member of his staff and said he was followed as soon as he entered the store.

"I have been followed in stores...my back gets up when a police cruiser comes behind me as I drive," says Min. Hussen, speaking about the daily reality of racism in Canada . #cdnpoli #ctvpp

"I looked at my staff member who was on the other side of the store and she was not followed. She happened not to be a member of the black community," Hussen said.

"She was surprised that I was being followed around. And for me, I was not. I was not surprised, but it's not about me. It’s about this is a very common reality for many, far too many, people in our country and it is important for us to acknowledge it."

Independent Conservative MPP for Lanark-Frontenac-Kingston Randy Hillier tweeted a response to Hussen’s interview in which he asked “A guilty conscience?

The tweet has since been deleted but has been met with sharp criticism online and multiple accusations of racism.

In fact, the Mayor of North Frontenac Ron Higgins tweeted “I tried to comment but I am lost for words on this one.”

Yes, we have racism in Canada. Hillier is an Ontario Conservative MPP. pic.twitter.com/yzWY8IV7hT

Following a sitting at Queen’s Park Tuesday afternoon in which Hillier opposed the government’s extension of the state of emergency, CP24’s Cristina Tenaglia asked the MPP if is he was going to apologize for the tweet.

Hillier walked away telling CP24 that he would talk tomorrow but offered no comment on the tweet.

CTV News Toronto has contacted Hillier’s office for comment but has not yet received a response.

MPP Randy Hillier opposes govt’s extension of the state of emerg. He came out of QP to speak to those gathered. He said he would talk to us, but after said it would have to wait. I asked x2 if he would apologize re deleted @HonAhmedHussen tweet, he walked away. #onpoli #cdnpoli pic.twitter.com/mRu48NX4lI

With files from Rachel Gilmore.