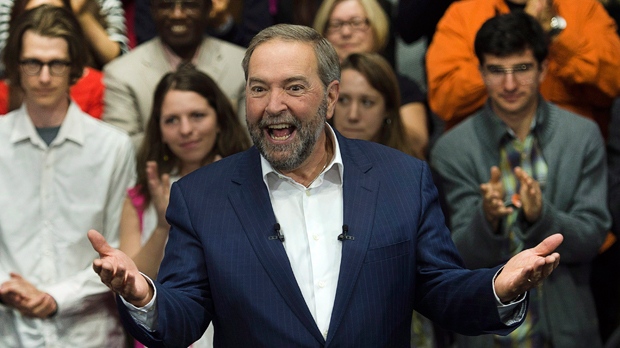 NDP Leader Tom Mulcair reacts to the applause as he arrives at a campaign stop in Montreal on Thursday, Oct. 1, 2015. (THE CANADIAN PRESS/Andrew Vaughan)

Speaking in Montreal, Mulcair said the Conservatives under Stephen Harper have ignored the problem of global warming.

He says Harper sees no urgency to act, and after a decade of time wasted, Canada's needs a prime minister with the long-term vision to fight climate change.

Mulcair's announcement was made mostly in French as he visited a riding the New Democrats took from Bloc Quebecois Leader Gilles Duceppe in the last election.

This election features a rematch as Duceppe fights to win back Laurier-Sainte-Marie from incumbent Helene Laverdiere.

That battle is now playing out against a backdrop in which polls suggest support for the New Democrats in their key Quebec base is slipping.

It was the NDP surge in Quebec in 2011 that propelled the party into Official Opposition status for the first time ever.

Mulcair, however, has been insistent that his party has never enjoyed stronger support in the province and has been, outwardly at least, confident his party will do well.

The NDP leader has been talking about fighting greenhouse-gas emissions and global warming all week.

He has says he would spend 200-million dollars over four years to help retrofit 50-thousand homes and 15-thousand apartments to make them more energy efficient.

Mulcair says it would save homeowners and renters money, and help save the environment.

He also promised to set new targets to electrify government vehicles and to set up 150 electric-car charging stations on federal properties.

Mulcair says an NDP government will be good news for towns, cities and the families who call them home.