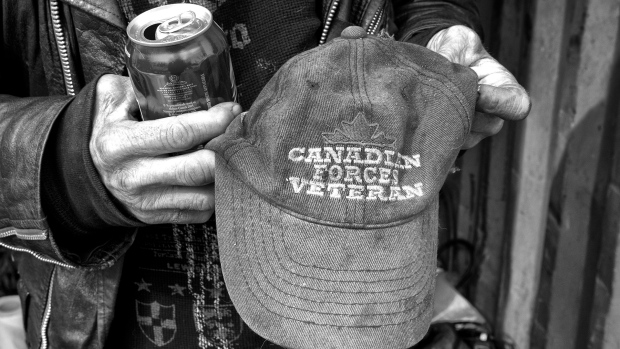 Claude Lord showns off a Canadian Veteran Forces cap recently in Montreal. Lord has been assisted by the federal government under a program aimed at getting ex-military personnel off the streets. He now gets a pension. Lord, a military vet lives in a shipping container in a poor neighbourhood of Montreal. THE CANADIAN PRESS/Paul Chiasson

The motion passed the House of Commons in June before the fall federal election.

It called for the government to deliver by next summer a plan to meet the target, which also included a special rent-assistance program for homeless veterans.

Accurate data about the number of homeless veterans in Canada remains elusive, but various studies peg the number at between 3,000 and 5,000 people, about 10 per cent of them women.

Social Development Minister Ahmed Hussen has told stakeholders in meetings of his interest in moving quickly on the issue given the cross-party support for the effort and identifiable policy options.

The Liberals' throne speech this month included a promise that the government will help ensure “that every homeless veteran has a place to call home,” although it didn't provide a timeline to do so.

The letters don't talk about a special housing stipend for veterans.

A briefing note to Hussen's predecessor Jean-Yves Duclos, obtained by The Canadian Press under the access-to-information law, outlined stakeholders' expectations that the forthcoming Canada Housing Benefit, which isn't just for veterans, “would serve as a tool to directly address veteran homelessness.”

The benefit will be tied to a person instead of a social-housing unit, meaning tenants won't lose the supplement if they move and allowing them to pay for rent in a private apartment rather than wait for a subsidized unit to become available.

In meetings with groups since becoming minister, Hussen has been asked to carve out a specific portion of the housing benefit for veterans amid worries they'll be left off the list of people eligible. Officials told Duclos in the July 9 briefing note the concerns stem from provinces' and territories' reluctance to fund veterans' housing because “they are considered a federal responsibility.”

Experts point to the success in the United States of direct housing benefits in reducing veterans homelessness as a case study for Canada.

The U.S. housing voucher program works similarly to the Canada Housing Benefit in that once a veteran no longer needs one of the allocated number of subsidies, it gets passed on to someone else.

If Canada were to take any lessons from the U.S., it would be to have the right programs, the necessary spending and political will, said Nan Roman, president of the Washington-based National Alliance to End Homelessness.

American spending on housing for instance, is roughly six times higher per capita for veterans than non-veterans, while pressure to act originally emanated out of the Obama White House and was echoed by local politicians, she said.

The result has been a 50 per cent decline in the number of homeless veterans since 2010, including a 2.1 per cent drop between 2018 and 2019, according to an annual report from the Department of Housing and Urban Development. The report, released days before Christmas, credited the drop to rental assistance and connected services from the U.S. Department of Veterans Affairs.

The results have raised some hope that a similar approach could reduce homelessness in other groups, Roman said. The problem isn't solved but it's dramatically improved.

“People totally took from this that it could be done,” she said. “Even though we didn't make it and we didn't do it everywhere people say that all the time: 'Look what we did for veterans.' ”