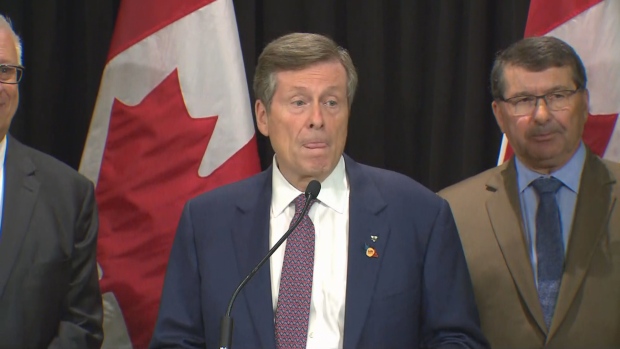 Mayor John Tory speaks with reporters about the Federation of Canadian Municipalities election platform on Thursday.

Canada’s municipal leaders, including Mayor John Tory, are calling on the federal parties to commit to not only preserving the billions of dollars that the current government has set aside for infrastructure but increasing those investments and extending them well into the future.

The money has already been a boon to municipalities, including Toronto where it is expected that $856 million in federal dollars for transit will flow as part of the first phase of the program, which expires in 2020.

Representatives with the Federation of Canadian Municipalities, however, want the leaders of Canada’s major parties to commit to extending the investments past 2027.

On Thursday, they held a press conference at a Toronto hotel to release their official election platform.

One of the key items in that platform is a call for the creation of a “permanent public transit funding mechanism,” which would allow municipalities to plan projects well into the future while knowing that the necessary federal dollars will be there to get them built.

“What we have in many cases, and these were significant steps forward, are commitments that take us through the next seven or eight years when it comes to things like housing and transit but everyone knows the planning horizon for projects of that kind actually go much longer than that, between the design and the actual construction,” Mayor John Tory said. “That’s why we need these parties to commit to a longer term series of investments that go beyond the investments we have managed to secure in the last number of years.”

Tory said that he and other municipal leaders are not necessarily asking for more annual funding than has already been committed to infrastructure but he said that they need to know that can expect to receive similar amounts of funding over a longer period of time.

He said that unfortunately the leaders of the Liberal, Conservative and NDP have so far only indicated that they will “preserve the money that has already been allocated.”

“That is fine but it doesn’t get us any further ahead with regards to planning for the future,” he said. “The planning and design for major transit projects stretch out for 20 to 25 to 30 years and If you are going to be able to start the planning and design in earnest so you don’t get bogged down waiting for the number one question, which is how we are going to pay for it, a reliable source of federal funding, along the lines of the percentages we have now, will allow us to look at longer range planning and bigger projects. We just need them to say that there is going to be a funding stream.”

Tory said that he has no plans to endorse any parties in the election campaign but will meet with and call on candidates to commit to the FCM’s platform, which he said “represents a road map for how municipalities of all sizes can work with the federal government.”

In addition to calls for additional investments in infrastructure, the platform calls on federal parties to commit to permanently doubling the portion of the gas tax that is given to municipalities.

In the 2019 budget, the Liberal government committed to providing municipalities with $2.2 billion in additional gas tax revenue as part of a one-time top up to help fund infrastructure.

“Why is 2019 standing by itself? The need for all of these funds to be invested in all those things and more will continue in 2020, 2021, 2022 and on you go. That is why we need commitments from the parties to say that that one off initiative will be made permanent,” Tory said.

FCM President Bill Karsten told reporters that the doubling of the portion of the gas tax given to municipalities is the “most effective and efficient step the next government can take to better lives in communities of all sizes.”

He said that it will also help address the fact that municipalities are responsible for 60 per cent of Canada’s public infrastructure but only collect 10 per cent of each tax dollar.

“If the federal parties are serious about building better lives they need to empower the governments closest to Canadians,” he said.