A York Region man who killed three children and their grandfather in a drunk driving crash apologized directly to the family today but the parents of the children refused to listen, walking out of the courtroom.

Marco Muzzo, 29, stood up in court and spoke publicly for the first time Wednesday on the last day of his sentencing hearing. His voice was shaky and weak and was wrought with emotion as he told the Neville-Lake family how devastated he is about his actions.

But before he even uttered a word, Edward Lake and his wife Jennifer Neville-Lake left their seats in the back row and walked out. They didn’t return until after Muzzo was back in the prisoner’s box.

Speaking to reporters after court, Neville-Lake said she simply didn’t want to hear what he had to say.

“There’s nothing he could say that would have any impact on my life,” she said. “I don’t want to listen to the man who is responsible for killing my children. There is nothing he can say. His actions speak louder than his words. I don’t see why I should have to put myself through that.”

Earlier in the day, the family asked the judge to consider imposing a “no contact” order, preventing Muzzo from ever contacting them but his lawyers argued that such an order would allow people to wrongly believe he had been harassing them. The judge agreed and declined the order.

When Neville-Lake was asked if she thinks she would ever want to hear what he had to say, she said she may one day order a court transcript of his statement but doesn’t think she will do it anytime soon.

Back in court, Muzzo finished reading his apology after they had exited the room, saying he is “haunted” by the tragedy he caused.

“I stand here before you today with great remorse, sympathy and unimaginable regret,” he started. “As I listened with horror yesterday to the details of the catastrophic consequences of my actions, I knew that my words would be of no consolation. Ever since the tragedy that occurred as a result of my inexcusable conduct, I have wanted to say that I am sorry and apologize to your family from the bottom of my heart.”

“I am at a loss for words and I am on a constant search for the right way to express to you my sorrow. I know that there are no actions that can ever change what has happened. I know that there is no step that I can take to bring back your children Daniel, Harrison and Millie Neville Lake and your father Gary Neville – I pray that I could – but I cannot,” he continued as his own mother looked on from the front row, wiping a steady stream of tears away.

Muzzo, who appeared to be gasping for air at times, said he is “tortured by the grief and the pain” he caused their family.

“I could never have imagined the degree of suffering and pain I have caused,” he said. “If I could reverse the hands of time, I would without hesitation. I want nothing more than to attempt to bring some peace to your hearts and mind.”

Muzzo said he will spend the rest of his life trying to educate others about the dangers of drinking and driving.

“I will forever be haunted by the reality of what I have done and I am truly sorry,” he ended.

But Neville-Lake said his words and his feelings don’t change the life sentence she’s been handed – a life without her children and her father.

She told reporters she wasn’t impressed with the 92 character references people submitted in support of Muzzo.

She dismissed their characterizations of Muzzo as a kind, generous, helpful, hard-working and humble family man who simply erred in judgment and made a grave mistake.

Muzzo was driving home from the airport the morning of Sunday, Sept. 27, 2015 when he ran a stop sign and slammed into a minivan, killing Daniel, 9, Harrison, 5, Millie, 2, and Gary, 65 as well as seriously injuring Neville Lake’s mother and 91-year-old grandmother.

An agreed statement of facts entered into court earlier this month said Muzzo needed help standing at the scene and had urinated himself.

In a psychiatric report submitted in court, Muzzo says he was coming home from his bachelor party in Miami and had three or four drinks on the plane. He told the doctor that he remembers feeling good but not inebriated and that he was surprised when a breathalyzer test showed he was nearly three times over the legal limit.

His lawyer Brian Greenspan pointed to the psychiatrist’s conclusion in the report that Muzzo is a well-adjusted and compassionate man who is dealing with anxiety, post traumatic stress and depression as a result of the devastating crash. The report concluded by saying Muzzo is at low risk of re-offending.

Greenspan used the report as well as the dozens of character references and case law to argue that the judge should consider giving Muzzo a sentence of eight years rather than the 10-12 years the Crown Attorney was asking for.

“He is permitted and expected to count on the good deeds of his life, his generosity, his human decency to counter balance what has taken place,” Greenspan said, urging the judge balance his good character with the weight of his crime.

The Crown argued that handing Muzzo a harsh sentence would serve as a deterrent to other young people in a region that has seen an increase in drunk driving charges over the years. A 10-12 year sentence would be one of the harshest sentences ever given to an impaired driver.

However, in the mind of Neville-Lake, the number of years Muzzo spends in jail bares little weight on her mind.

She told reporters that a harsh sentence could mean that she would hopefully be one of the last mothers to suffer such a horrific loss. But she said the reality is, no amount of jail time would ease the excruciating heartache she is dealing with.

“Any number that’s thrown out always to me goes back to where my children would be in their lives and what I would have been celebrating with them,” she said.

Justice Michelle Fuerst will hand down her sentence on March 29. 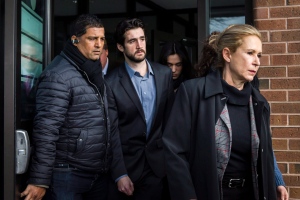 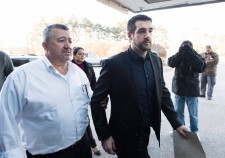 Marco Muzzo, right, arrives with family at the court house for his sentencing hearing in Newmarket, Ont., on Tuesday, Feb. 23, 2016. (The Canadian Press/Nathan Denette)