A 29-year-old man charged with killing three kids and their grandfather in a drunk driving crash will plead guilty to charges at a court appearance next month, his lawyer told reporters Wednesday afternoon.

“(Marco Muzzo) accepts responsibility for his conduct and the devastating consequences of that conduct,” his lawyer Brian Greenspan told reporters outside the courtroom. “Actions more than words are the true expression of the remorse that he feels.”

Greenspan insisted no plea deal was made and that the Crown and he will argue for different sentencing during a hearing that begins on Feb. 23.

Muzzo is facing charges of impaired driving causing death, dangerous operation of a motor vehicle causing death and impaired driving causing bodily harm. Greenspan said some of those charges are “redundant” and likely won’t be presented in court at his next appearance on Feb. 4 but that Muzzo will be pleading guilty to all charges presented by the Crown.

“It’s been a very long and difficult ordeal but (Muzzo has) wanted this matter to be closed as quickly as possible,” Greenspan said.

He said both sides in the case will present an agreed statement of facts at the Feb. 4 sentencing.

Muzzo has been confined since the incident. Greenspan says that by the time of sentencing, Muzzo could be eligible for up to six months of pre-trial custody credit.

Greenspan would not comment on the length of sentence he would propose for his client.

Muzzo is charged in connection with the deaths of nine-year-old Daniel Neville-Lake, his five-year-old brother Harrison, their two-year-old sister Milly and the children’s 65-year-old grandfather Gary Neville, who were all killed on Sept. 27 after the minivan they were travelling in was t-boned by an SUV in Kleinburg.

The children's parents Edward Lake and Jennifer Neville-Lake were present in the packed Newmarket courtroom this morning along with Muzzo's family and members of the media.

Devastated parents say they are stuck in their grief

“We’re cautiously optimistic about what happened today — that on Feb. 4 — we will hear a plea,” Jennifer told reporters outside of the courtroom Wednesday afternoon.

She added that Feb. 4 is the day after what would have been Daniel Neville-Lake’s 10th birthday.

She said a guilty plea wouldn’t “fix” her and her husband’s sorrow or bring their children back to life, but it may allow them to move on.

“Just maybe we can stop living in Groundhog Day. To us it’s Sept. 28 with snow on the ground, because we cannot move. We can never repair but maybe we can start to learn how to carry our broken parts.”

Jennifer said she cares little about the sentence Muzzo will receive next month.

Jennifer said there have been no discussions about financial compensation from the Muzzo family, although she said they are aware of the ability to seek it.

Her husband, Edward Lake, said he still feels “lost” and “destroyed” by the crash.

Jennifer said her and Edward don’t do much anymore, aside from visiting the graves of their children and Jennifer’s father, attending court dates, visiting with family members and walking around a local grocery store.

She said they’ve been unable to progress and try to deal with their pain while the court process continued. But it’s been important to attend court, to be there for her dead children.

“Now this is the only thing left that we can do for them.”

With the promise of a guilty plea, Jennifer said there is more time available for her to cry.

“All it would mean is that I don’t have to get out of bed and I can stay in bed and cry all day. What is my life now? That’s what it would mean. It would mean I may only have to come once or twice more as opposed to showing up every day for however long a trial is.”

She said she still gets up at the same time she did when her children were alive —5 a.m.— but now she stares at pictures of her children, “listening, hoping that I can hear them.”

“There will be a range of sentence that they will argue about or make submissions about and allow the judge to decide what the appropriate number is.”

Shidlowski said a fine and some probation conditions, along with the possibility of a donation to a charity such as Mothers Against Drunk Driving may be part of the final sentence.

“If you’re an outsider watching all of this and you think a high-priced lawyer can get you off of something where you’re guilty, this is a really nice message that the court system at its highest, in the way that we all hope it does, can work.”

This sketch shows Marco Muzzo inside a Newmarket courtroom on Jan. 6. (John Mantha) 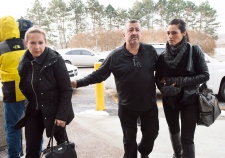