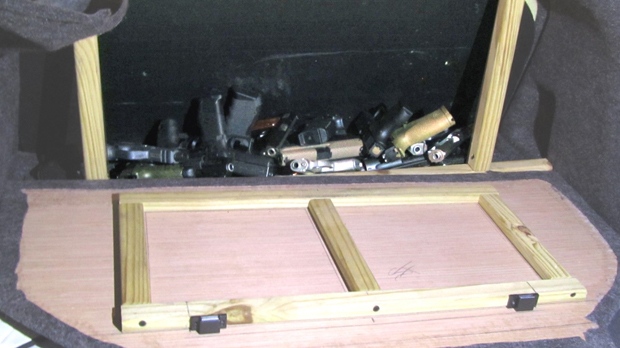 Handguns are seen in a secret compartment found inside a vehicle searched in Niagara Falls on Oct. 16. (CBSA)

A 28-year-old man from Niagara Falls, New York is facing a raft of charges after allegedly attempting to cross into Ontario with 20 handguns loosely stored inside a hidden compartment in his car last month.

On Oct. 16, the suspect drove his vehicle to the Ontario-side of the Niagara Falls border crossing and Canada Border Services Agency (CBSA) agents referred him to secondary inspection.

CBSA officers searched the man’s car with a dog and allegedly found 20 handguns strewn about, with their barrels pointed in all directions, inside a custom concealed compartment in the car.

The suspect, identified by the CBSA as Marquise Tariff Watkins, was arrested and charged by CBSA with willful evasion, making false statements and attempting to smuggle, violations of the federal Customs Act.

The CBSA said it then called Niagara Regional Police to the scene, who laid additional charges against Watkins.

Watkins is expected to appear in court in St. Catharines on Wednesday.

Last week, Toronto police disclosed the disruption of a gun smuggling ring, where a woman was stopped by the CBSA with 25 handguns shrink-wrapped in the gas tank of her rental car after passing the Peace Bridge in Fort Erie.

At the time, a senior CBSA official told reporters they intercept an attempt to smuggle multiple guns through the Niagara region to the GTA once a month.