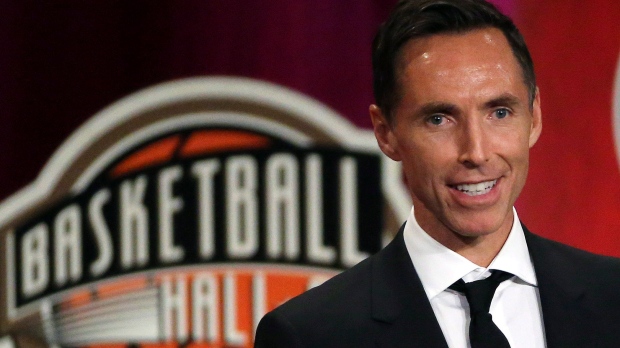 Steve Nash speaks during induction ceremonies at the Basketball Hall of Fame, Friday, Sept. 7, 2018, in Springfield, Mass. Nash and hockey players Willie O'Ree and Sheldon Kennedy are among this year's inductees into Canada's Sports Hall of Fame. THE CANADIAN PRESS/AP-Elise Amendola

The Sports Hall of Fame is inducting six athletes and five builders in recognition of its 65th anniversary in 2020.

The Hall has now inducted 681 athletes and builders. The Sports Hall of Fame museum is in Calgary.

The annual fall induction gala has been postponed to 2021 because of COVID-19.

“In these uncertain times, we are thrilled to be able to share a good news story and to have this remarkable group of people to induct into Canada's Sports Hall of Fame next year,” Hall president and chief executive officer Cheryl Bernard said in a statement Wednesday.

Nash, from Victoria, was an NBA guard for 18 years and was twice named the league's most valuable player.

Montreal's Lamaze and the late Hickstead won Olympic gold and team silver at the 2008 Olympic Games. Lamaze and Hickstead enter the Hall as a team.

The two-time Olympian was a medal contender for the 1980 Olympics in Moscow, but Canada boycotted those games.

Fredericton's O'Ree was the first black hockey player in the NHL.

Kennedy, from Elkhorn, Man., played in the NHL for a decade and devoted his post-hockey career to the education and prevention of child abuse.

“I was truly shocked and humbled when I received the call stating that I had been selected to become a member of Canada's Sports Hall of Fame,” Kennedy said in a statement. “Who would have thunk!”

“I immediately wanted to accept this honour on behalf of all who have helped, and continue to help, make a difference in the areas so important to me personally and society as a whole.”

Powless, from the Six Nations of the Grand River First Nation, Ont., coached and organized lacrosse leagues and tournaments. He died in 2003 at the age 76.

Kent, from Picton, Ont., was the first woman to serve as president of Commonwealth Games Canada from 1994 to 1998.

Winnipeg's Campbell is known as “The Quadfather” because he was one of the inventors of the sport known today as wheelchair rugby. He played for and coached the national team.

The Hall of Fame was housed in various locations in Toronto for decades, but was without a physical building for a six-year span until Calgary's 4,100-square metre facility opened in 2011.