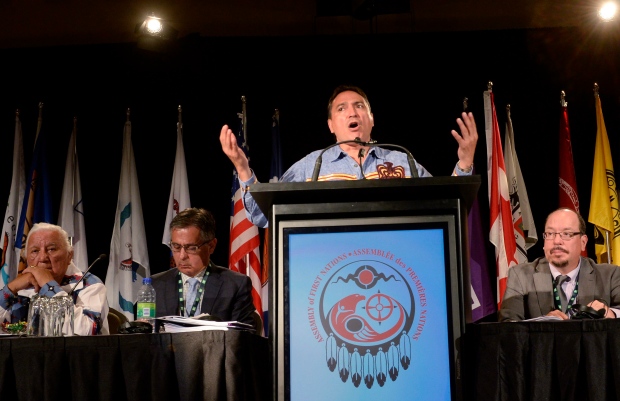 MONTREAL -- National Chief Perry Bellegarde says he will not use his influential role as the head of the Assembly of First Nations to strike deals with the federal government without the full support of First Nations.

It's a promise that speaks to a long period of upheaval within the AFN, and the rocky relationship between the organization and the federal government.

Chiefs are gathered in Montreal for their annual meeting this week -- Bellegarde's first as national chief.

He took the reigns from Shawn Atleo, who abruptly resigned in the spring of 2014 due to controversy over his support for the federal government's First Nations education act announced the previous winter.

As he reflects on the events that led to his predecessor's departure, Bellegarde is vowing not to make the same mistakes.

"There was a lack of awareness and communication about it on everybody's side. And as the new national chief with a new mandate, I will not be doing those kinds of agreements," Bellegarde said in an interview on the sidelines of the Montreal gathering. "That's the reason that that failed, and I am not going to fail on any new things coming forward."

Bellegarde was in the room in February 2014 when Stephen Harper publicly announced the $1.9 billion education deal with Atleo in front of the national media.

He insists he was never on board with the deal, but attended that day to "find out what was going on."

The education package, and Atleo's support of it, remain contentious. The AFN's newly-elected Ontario regional chief, Isadore Day, wonders if indeed there ever was a real deal on the table.

Day said there "certainly seemed to be something wrong" with the way the agreement was reached, including a lack of implementation plan.

"The former national chief had a lot of back-door dealings and discussions on that which we never knew took place," Day said.

Bellegarde said the AFN has learned that it has to be "more transparent and open" in everything its does. But he said now is the time to move forward.

"Now we've learned," he said. "We have a lot of opportunity to close the gap and bring about change and start fresh with new relationships. And that's where my head goes."

Bellegarde is hopeful the government will sit down with the AFN again to establish a national fiscal framework for education, but he said the Conservatives have not come to table yet.

Aboriginal Affairs Minister Bernard Valcourt did not attend the Montreal gathering but his office issued a statement to indicate the government is taking steps to improve the well-being of First Nations by enabling them to take "full advantage of Canada's economic prosperity."

"Our government believes that Aboriginal peoples should have the same quality of life and the same opportunities as all other Canadians," said press secretary Emily Hillstrom.

The government also insists the education funding will still be available -- for First Nations that support the connected legislation.

Bellegarde has been lobbying all federal parties to address issues such as overcrowding, housing and access to clean drinking water in their election platforms.

The AFN continues to urge First Nations to become engaged in the political process.

The advocacy group has identified 51 swing ridings that could be affected if First Nations voters flock to polling stations.

"Our objective is to ensure that our First nations people are educated and aware of the impact they can have if they so choose," Bellegarde said.

Mulcair offered a "new era" of nation-to-nation relations with indigenous communities if he becomes prime minister in October.

The NDP plans to commit to a "government-wide" approach to address aboriginal affairs.

Trudeau also unveiled a series of commitments on Tuesday, including a promise to bolster funding for aboriginal education. He did not disclose the pricetag that would be attached to this.

Trudeau also addressed the need to reset the relationship between First Nations and the federal government.

But some chiefs remain skeptical.