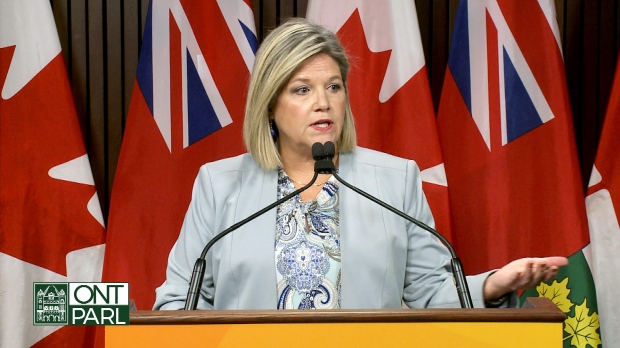 TORONTO - Ontario's auditor general should look into the cancellation of hundreds of renewable energy contracts by the Doug Ford government so the public knows how much that decision will end up costing taxpayers, the leader of the Opposition said Wednesday.

NDP Leader Andrea Horwath said she was concerned the final cost of cancelling 750 contracts could surpass the $231 million the Progressive Conservative government said it has put aside.

In a letter to auditor general Bonnie Lysyk, the Opposition leader asked the legislative watchdog to launch an investigation into the contracts' termination fees.

The NDP first reported the cost of the cancellations Tuesday, saying the $231 million figure was listed as “other transactions” in government documents detailing spending in the 2018-2019 fiscal year.

“This lack of transparency is concerning,” Horwath wrote in the letter. “Without a detailed explanation of the full costing of these cancelled contracts, Ontarians are left to wonder what will be the extent of the costs of decommissioning and termination of the power purchase agreements.”

The Progressive Conservatives acknowledged Tuesday that the cancellations could cost taxpayers more than $230 million, but said the final figure, which includes the cost of decommissioning a wind farm already under construction in Prince Edward County, Ont., has yet to be established.

Horwath said she fears the costs could escalate, as they did when the previous Liberal government cancelled two gas plants set for construction just outside of Toronto in 2011.

At that time, the Liberals said the cost of scrapping those deals was approximately $230 million, but the province's auditor general later established that taxpayers were on the hook for $950 million.

“They have an obligation, as the government in power, to have the auditor general give the public a true representation of what their cancelling of contracts is going to cost,” Horwath said Wednesday.

Energy Minister Greg Rickford said cancelling the contracts last year was the “appropriate and responsible” thing to do because the province doesn't need the power.

“Out of an abundance of caution, a responsible government makes contingency plans for those kinds of steps,” he said, of the cancellation costs. “The decommission costs are something we should accommodate for. Should they not be used, they'll go back to the taxpayer base.”

Lysyk's office confirmed it has received and is reviewing Horwath's request. The auditor is not legally required to investigate.

Interim Liberal Leader John Fraser said the government has repeatedly said it has faith in the auditor's office, so it should stand behind those statements in this instance as well.

“I think if (Rickford) wants to validate his story, he should just make it open to the auditor general,” he said.

Green party Leader Mike Schreiner said the auditor can provide the transparency required to clear the air on the controversial file.

“We need the government to be honest with the people of Ontario what the costs of cancelling contracts is going to be,” he said. “The auditor general can provide an independent, honest assessment of what the costs are going to be.”