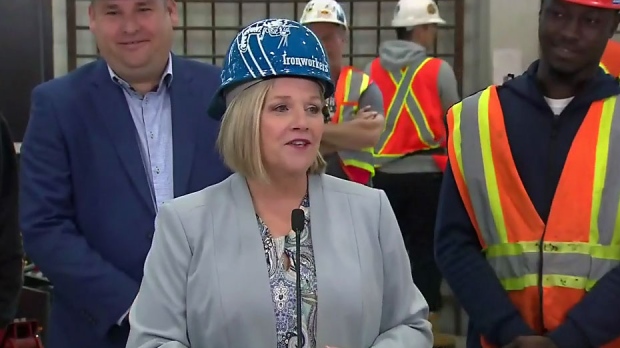 Support for Kathleen Wynne’s Liberal party appears to have collapsed, putting the NDP rather than the Tories in the best position to form a majority government in two weeks’ time, a new poll suggests.

The Forum Research poll of 906 randomly selected Ontario voters has determined that 47 per cent of decided or leaning respondents now support the NDP compared to 33 per cent for the PC party and just 14 per cent for the Liberals.

Forum Research says the results suggest that if an election were held today, the NDP would get a majority government with 79 seats while the Tories would serve as the Official Opposition with 40 seats.

The Liberals, meanwhile, would end up with five seats, losing official party status in the process.

“I think at the end of the day about 60 per cent of Ontarians are progressives, either left or centre left, and I think they are starting to coalesce and they have picked one of the two parties, the NDP, as the best able to defeat Doug Ford,” Forum Research President and CEO Lorne Bozinoff told CP24 on Friday morning. “We don’t have the old party loyalty anymore so people change their vote at the drop of the hat.”

NDP support up 14 points from two weeks ago

Forum Research has conducted 40 polls on the preferences of Ontario voters since the last election in 2014 but this is the first time that Andrea Horwath and the NDP party have jumped into first place.

The projected distribution of seats is also radically different.

The last time Forum Research polled Ontario voters two weeks ago, the Tories were still on track to get a majority government with 75 seats while the NDP were projected to become the Official Opposition with 37 seats.

Bozinoff said that while Ford has had “some stumbles” on the campaign trail the shift in voter intention may be attributable to the collapse in Liberal support.

“I am kind of surprised to see the Liberal vote really collapsing. We had them at 21 per cent a couple weeks ago which is a disaster on its own and now we have them down at 14 per cent. I think it is because Doug Ford has really scared those liberals and they are going to vote NDP to defeat Doug Ford,” he said.

Support for the NDP party was the highest in Southwestern Ontario (57 per cent) and Northern Ontario (45 per cent) but the party also performed relatively well in both Toronto and the 905 region surrounding the city (44 per cent).

Meanwhile, the Tories did well in Northern Ontario (37 per cent) but languished far behind in Southwestern Ontario (28 per cent). The party’s once dominant hold on the 905 also slipped, as they currently have the support of 34 per cent of decided or leaning voters in the region compared to 44 per cent for the Liberals, according to the poll.

The poll is considered accurate to within three percentage points, 19 times out of 20, though the region-by-region margins of error are higher.