Nearly 8,000 children aged 5 to 11 have now gotten first vaccine dose as Ontario continues to see increase in school closures due to COVID-19 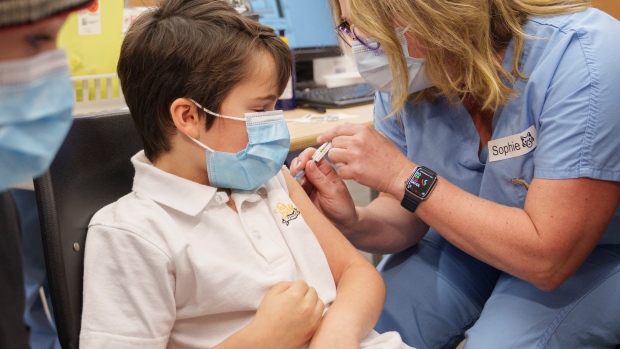 Thomas Decarie watches as he gets vaccinated during the first day of vaccination for children aged five- to 11-years old in Montreal, Wednesday, Nov. 24, 2021. THE CANADIAN PRESS/Paul Chiasson

Nearly 8,000 Ontario children aged five to 11 have now received their first dose of COVID-19 vaccine as efforts to protect the group amid rising case counts tied to schools intensify.

Health Canada approved Pfizer’s pediatric vaccine last week but vaccinations for younger school-aged children only really got underway on Thursday, with the exception of a few hundred appointments in Toronto one day prior.

A spokesperson for the Ministry of Health says that by 8 p.m. nearly 8,000 children had received a first dose, though she notes that the number is somewhat supressed by the fact that many public health units, particularly in Northern Ontario, are still awaiting vaccine supply.

There are believed to be about one million children aged five to 11 in Ontario, including 200,000 in Toronto.

Toronto officials say that 38,000 of the 50,000 available appointments for younger-school aged children at its mass immunization sites have already been booked. There are also expected to be nearly 400 school-based clinics offered over the next month in the city.

The rush to vaccinate younger children comes as Ontario sees a surge in school-related cases of COVID-19 and closures.

On Friday the Ministry of Education reported another 141 new cases in students and school staff over a 24-hour period ending Thursday afternoon.

That is up from 109 cases during the same time period last week.

The number of active cases associated with Ontario’s public school system now stands at 1,541, which is the highest that number has been since Oct. 6 and represents a nearly 22 per cent jump from this time last week.

Speaking with reporters on Thursday, Chief Medical Officer of Health Dr. Kieran Moore acknowledged that there will continue to be a rise in school-related cases over the coming weeks, particularly at the elementary level.

But he said that the approval of Pfizer’s vaccine for younger children provide a “silver lining” of sorts.

“First doses will be helpful and second doses will be tremendously beneficial against Delta on limiting the spread. So there is hope,” he said. “I know this is a difficult time. But there's a hope now that we have the vaccine that we can have decreasing impact on our elementary school system.”

According to the latest data, there are now 17 publicly funded schools that are closed due to COVID-19 outbreaks or operational considerations related to the pandemic.

It is the highest number of simultaneous school closures at any point this year and is also well ahead of what we were seeing at this point in 2020 when just six schools had been closed for in-person learning.

Meanwhile, the total number of school-related cases of COVID-19 continues to rise and has now surpassed 7,000.

In 2020, it took until Dec. 17 to reach that number and within days of that the Ford government announced a temporary closure of schools following the holiday break.

Moore, however, insisted on Thursday that the government remains committed to preserving in-person learning, despite the rise in cases.

“In the New Year after the second doses we really do anticipate seeing a decrease in the number of children affected as we've seen in high schools,” he said. “The number of high school outbreaks are often limited to a smaller numbers of students and there is less risk to the school. I think you've heard fit rom all the medical officers of health. Our goal is to keep schools open. They should be the first open and the last to close and we will do our utmost to maintain in-person learning throughout Ontario.”

There are currently 712 Ontario schools with at least one active case of COVID-19, accounting for nearly 15 per cent of all public schools.