Negotiations between Exhibition Place and locked out workers called off 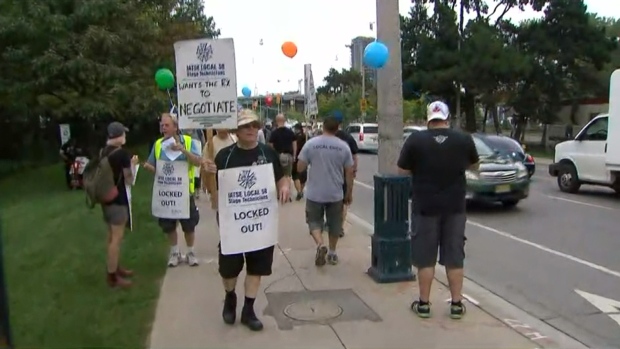 Talks between Exhibition place and a union representing nearly 400 locked out stagehands and technical workers have been called off for today and it is unclear when the sides will get back to the table.

Negotiators for Exhibition Place and the International Alliance of Theatrical Stage Employees (IATSE) Local 58 were supposed to sit down for talks on Sunday morning in the wake of a 12-hour session on Friday but the union says that they were informed on Saturday night that the session would not be held.

The cancellation of the talks planned for Sunday comes after the union accused the Exhibition Place board of only “paying lip service” to good-faith bargaining following Friday’s session.

“IATSE local 58 returned to the negotiations ready to bargain with proposals to modernize and find efficiencies in the contract but the city refused to budge on contracting out language. Requests from the union for examples of what kind of movement would need to be seen on this issue in order to move negotiations forward were ignored,” the union said in a statement issued Saturday morning.

While the union did say on Saturday that they felt today’s talks were “in jeopardy,” Local 58 President Justin Antheunis told CP24 that he and other members of the negotiating committee were nonetheless committed to returning to the table.

He said that the union was only informed that the talks were off at around 7:30 p.m. on Saturday.

“After trying to get an answer from the city all day, we finally received one at 7:30 p.m. saying it was too late to schedule one for today, even though we had it scheduled for today on Thursday,” he said on Sunday morning.

Members of IATSE Local 58 have been locked out since July 20.