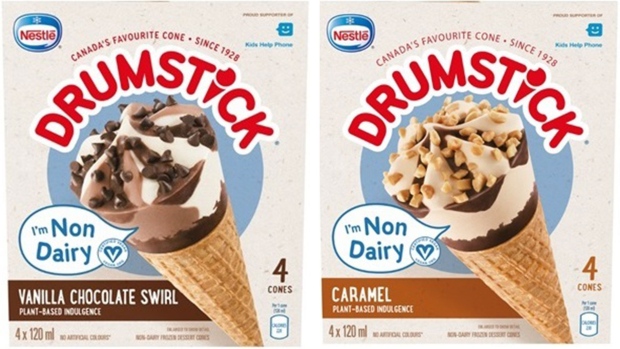 Nestlé Canada is recalling two non-dairy ice cream drumstick products because they may contain the very product their title says they don’t.

A recall notice posted by the Canadian Food Inspection Agency (CFIA) Friday says that the company is recalling the treats because they may contain milk which is not declared on the label.

So far, one person has become sick from consuming the products.

“If you have an allergy to milk, do not consume the recalled products as they may cause a serious or life-threatening reaction,” the CFIA said in its release.

CFIA is encouraging people to check their freezers for the products and to either throw them away or return them to the store where they were purchased.

The recall comes after testing conducted by the CFIA as part of a food safety investigation.

The release did not say how the undeclared dairy came to be in the product.

In a statement to CP24.com, Nestle Canada said an investigation into the incident is ongoing.

“To date, we have received one consumer complaint on one batch of DRUMSTICK Vanilla Chocolate Swirl Non-Dairy Frozen Dessert Cones (batch 10530375),” the company said in an email. “Although our investigation is ongoing, including a full review of our rigorous quality practices and an assessment of ingredients provided by our suppliers, we decided to take immediate action and remove the product from the marketplace and are also voluntarily recalling the DRUMSTICK Caramel Non-Dairy Frozen Dessert Cones out of an abundance of caution.”

The company added that “the safety of our products is our number one priority.”