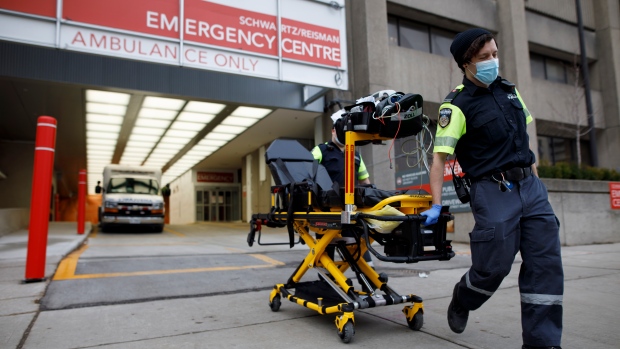 Paramedics wheel a gurney out from the emergency department at Mount Sinai Hospital in Toronto, Wednesday, Jan. 13, 2021. THE CANADIAN PRESS/Cole Burston

New modelling will be released today amid early signs that COVID-19 case counts could finally be on the decline after weeks of exponential growth.

Hospital admissions, however, have continued to increase and on Wednesday the Ford government issued an emergency order that would allow some patients waiting for a long-term care bed to be transferred to any long-term care home without their consent in a bid to free up capacity.

There are currently 879 COVID patients in intensive care, accounting for more than a third of all available beds in the province.

“There's a bit of a lag, we have to see the case counts come down first and then we will see the impact in the ICU and in hospitalization and that time lag can be about two to three weeks,” Ontario Health CEO Matthew Anderson told reporters during a news conference on Wednesday. “On an encouraging note while the growth in our ICU volumes and in our hospitalizations does continue that also seems to be slowing. We do hope is a trend that we're going to see and is directly related to a reduction in case count.”

The last COVID-19 modelling projections released on April 16 said that there would be more than 1,000 COVID patients in intensive care by this weekend under every single scenario and it warned that the number could hit 1,500 by mid-May even with “strong” public health restrictions.

It also suggested that even with aggressive public health measures, similar to those taken during the first wave of the pandemic last spring, daily case counts were likely to reach 7,000 before starting to decline

However, within hours of the release of that modelling the Ford government ordered the closure of all recreational amenities and extended the stay-at-home order for another two weeks.

It also temporarily handed police the power to arbitrarily stop and question people to ensure compliance with that order, though the premier walked that back within 24 hours and later issued a public apology for doing so without fully considering the ramifications.

“I truly believe we are seeing the end of this nightmare. The end is in sight,” Mississauga Mayor Bonnie Crombie said during a news conference on Thursday morning. “Cases appear to be slowing down, vaccinations are ramping up but please for now continue to listen to the advice of public health and limit your close in-person contact to just your immediate household.”

Dr. Adalsteinn Brown, co-chair of the province's science table, will be presenting the new projections during a news conference scheduled for 3 p.m.

CP24.com will have a LIVE stream.