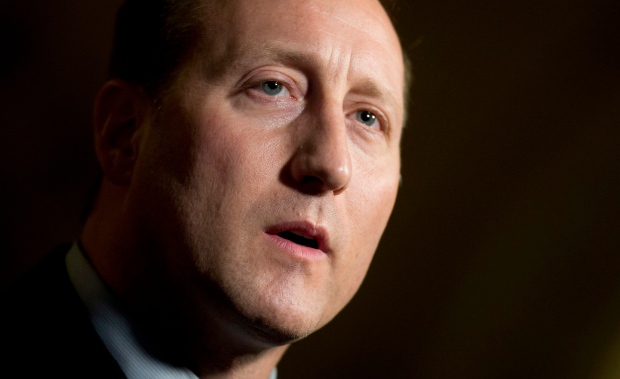 Justice Minister Peter MacKay responds to a question after speaking in the Foyer of the House of Commons on Tuesday, Nov. 19, 2013, in Ottawa. (The Canadian Press/Adrian Wyld)

OTTAWA -- The Conservative government has introduced a wide-ranging bill designed to make it illegal to distribute "intimate images" without consent and easier to get such images scrubbed off the Internet.

The proposed law includes tentacles that touch on everything from terrorism and organized crime to stealing cable TV -- measures Justice Minister Peter MacKay said are necessary due to the digital nature of the crimes.

"This is the type of crime that really knows no borders," MacKay said Wednesday as he and Public Safety Minister Steven Blaney announced the legislation.

"Once (an image is) on the Internet, once it's been uploaded, it has the ability to go viral. We need to also empower the police to have the tools to track and preserve and present information (to the courts)."

If passed, the legislation would also give courts the power to seize computers, cellphones and other devices used in the offence, and to help victims recoup part of the cost of removing the images from the Internet.

It would also compel the spouse of an accused person to testify against the accused in court.

The government bills the legislation as part of its commitment to help put an end to the kind of online exploitation and harassment that has led a number of Canadian youth to take their own lives in recent years.

But the bill applies to adults and young people alike who find themselves targeted for online harassment or intimidation.

MacKay said Canadians have been touched by a number of recent cyberbullying suicides, including the death in September of Saskatchewan high schooler Todd Loik, 15, and Rehtaeh Parsons, the 17-year-old Nova Scotia teen who died in April after trying to take her own life.

MacKay said it's clear that cyberbullying and online harassment can destroy lives, and that the government has an obligation to make the penalties and consequences more serious for perpetrators.

Those who advocate for legal changes to combat cyberbullying applauded the legislation.

"No one could have imagined the impacts of technology on youth," said Lianna McDonald, director of the Canadian Centre for Child Protection.

"(The bill) will assist in stopping the misuse of technology and help numerous young people impacted and devastated by this type of victimization."

MacKay rejected suggestions that the legislation is so broad that it could outlaw the transmission of intimate text messages, or "sexting."

Rather, he said, it closes a "gap" in the Criminal Code and modernizes the law to take into account the prolific distribution of images and words over the Internet, and the resulting impact on young people, he said.

"This section, we believe, captures the non-consensual distribution of intimate images," said MacKay.

The legislation, once passed, will require close judicial oversight of the investigative powers being given to police, he added.