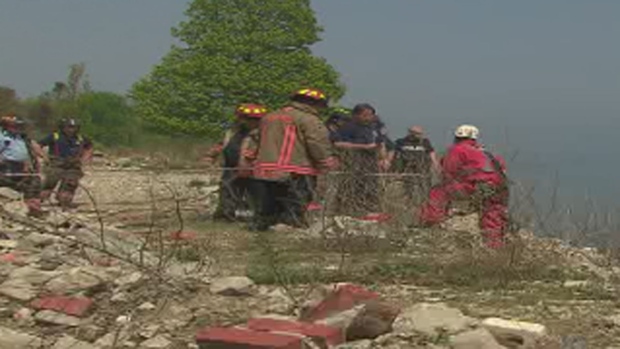 Firefighters work to rescue a girl stranded on a cliff at Scarborough Bluffs Monday May 18, 2015.

More than 500 metres of fencing is going up along the western approaches to the Scarborough Bluffs in an attempt by the City of Toronto to prevent people from climbing their way into peril on the cliffside, a local councillor says.

Coun. Gary Crawford says the fencing will be put up in two stretches inside Scarborough Heights Park, which lies southwest of the largest portion of the Bluffs and Bluffers Park.

“The smaller west portion follows the top of the embankment from the community garden to the Bluff's edge, the larger east portion installed provides security, wrapping the lower half of the park along the Bluff's edge,” Crawford told constituents in an email.

The roughly two metre-high fencing will be complete by Friday.

He says that incidents involving people climbing and getting stuckon the cliff have taken up way too much firefighter and city bylaw enforcement staff time.

“Despite enforcement and the issuance of hundreds of tickets, the dangerous behaviour continues, resulting in Emergency Services personnel having to take action and conduct rescue operations.”

The City said that in 2018, rescue efforts at the Bluffs used up 382 hours of firefighters’ time, across 18 incidents, some of which involved people falling significant distances down cliffs and injuring themselves.