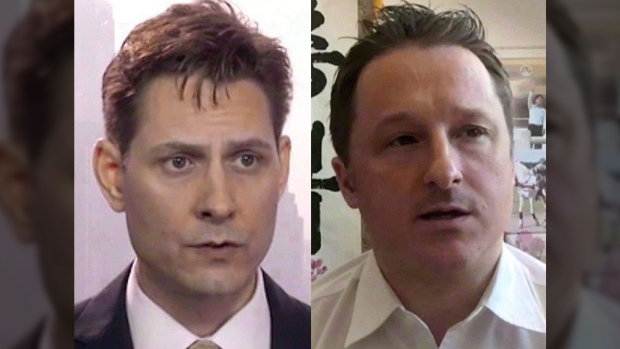 Michael Kovrig (left) and Michael Spavor, the two Canadians detained in China, are shown in these 2018 images taken from video. THE CANADIAN PRESS/AP

OTTAWA -- Canada's new foreign affairs minister hit the ground running this weekend, spending an hour in face-to-face talks with his Chinese counterpart over the fate of two Canadian men that the Trudeau government maintains are being arbitrarily detained.

Francois-Philippe Champagne, who was shuffled into the new portfolio on Wednesday, spoke with China's Wang Yi on Saturday at the G20 foreign ministers' meeting in Nagoya, Japan.

Champagne was discussing the fate of businessman Michael Spavor and former diplomat Michael Kovrig, who have been in Chinese prisons for almost a year on allegations of undermining China's national security.

Champagne said securing the release of Spavor and Kovrig was his "absolute priority" as he takes over the post as Canada's top diplomat at a time when relations with China have hit a new low.

Sino-Canadian relations have plummeted since Dec. 1 when the RCMP arrested Huawei Technologies executive Meng Wanzhou at Vancouver airport, at the request of the United States, which is seeking her extradition for allegations of violating sanctions on Iran.

Spavor and Kovrig were arrested nine days after Meng's arrest in what is widely seen as retaliation.

"I took the opportunity to express Canada's deep concern over the case of Michael Spavor and Michael Kovrig, who have been arbitrarily detained in China for almost a year. These cases are my absolutely priority as foreign minister of Canada," Champagne told reporters in a conference call on Saturday night.

"In particular, I expressed my concern and the concern of all Canadians regarding the conditions of their detention. Minister Wang and I committed to our continuing conversation and to continue to be discussing this issue."

Champagne declined to elaborate, citing the need to protect the welfare of the two detainees.

"But I can assure you this is my absolute priority as minister of foreign affairs," he said.

Champagne replaced Chrystia Freeland at foreign affairs, and he has had close first-hand experience dealing with Chinese politicians in a previous cabinet post as international trade minister.

In a dramatic twist during Prime Minister Justin Trudeau's December 2017 trip to China, Champagne's staff were pulled off the prime minister's jetliner as its engines were warming up for a flight out of Beijing to southern China's industrial heartland. Champagne was one of several cabinet ministers that accompanied Trudeau on the trip, which included a sit-down with Chinese President Xi Jinping.

Champagne stayed behind in the Chinese capital for two days, trying to kickstart the opening of formal free trade talks between the two countries.

Progress towards formal trade talks had proved elusive during the Canadian delegation's first two days in China. And while Champagne was unable to break the impasse, he worked closely and for long hours with his Chinese counterparts -- something to which the new minister made a veiled reference.

"As you know, I met him last I think when I was at the President Xi dinner, when there was a visit of the prime minister, so obviously he recognized who I am," said Champagne.

"I would qualify our discussion as being good, frank and it has been quite a long meeting, so there was receptivity of the concern of Canada. I expressed, like I said, my deep concern with respect to the detention conditions of the two Canadians, stressed with him that they will have been in jail now close to a year and that certainly, we wanted ... to see progress on that."

On Friday, China's newly arrived ambassador to Canada, Cong Peiwu, reiterated his government's long-standing hardline position on the matter: he said Meng's arrest and pending extradition to the U.S. amount to arbitrary detention, leading to the problems Canada and China are experiencing.

Cong said releasing Meng would pave the way for bilateral relations to return to normal.

Meng is free on bail, living in a comfortable Vancouver house. Canadian officials have met with Kovrig and Spavor several times since their arrests, but they have been denied access to lawyers or family.

The U.S. State Department has called for the release of the two Canadians. Germany, France, Britain, the European Union and Australia are among the countries that have also issued supportive statements, much to the consternation of the Chinese government.

This report by The Canadian Press was first published Nov. 24, 2019.