A group of scientists advising the Ford government say that the fourth wave of the pandemic appears to have “flattened” but they are warning that there is “no wiggle room” with new modelling now pointing to an exponential rise in cases should restrictions be lifted prematurely.

The projections, released by Ontario’s Science Advisory Table on Tuesday afternoon, suggest that the rolling seven-day average of new cases is on track to hover under 1,000 through much of October before rising to around 1,500 by the beginning of November, assuming there is no change in policy or behaviour.

But the projections warn that should Ontario lift most remaining restrictions, a scenario that the scientists concede is unlikely, case counts would likely surpass 5,000 by the end of November.

In a more optimistic scenario, based on a 25 per cent reduction in transmission, case counts would steadily decline and dip down to a few hundred a day by November.

“There is a wide range for case projections, reflecting the fragile situation and high degree of instability as colder weather approaches with more time indoors,” a presentation accompanying the new figures states. “Continued control over case growth requires high vaccination rates in the eligible population, continued public health measures, and a flattening of growth in mobility.”

The last projections released by the science table back on Sept. 1 warned that daily case counts could reach 4,000 a day by October if the province continued along the trajectory it was on then.

But the projections also suggested that Ontario could see case counts begin to decline so long as residents reduced their contacts marginally and the province has, in fact, charted closer to that “best case scenario” with it’s rolling seven-day average now standing at 606, down from 701 on Sept. 1.

In a series of messages posted to Twitter on Tuesday afternoon, the science table said that Ontario is currently “walking a narrow ledge” with case counts increasing in 19 of the province’s 34 health units as well as among the cohort of school-aged children that are not yet eligible to be vaccinated (ages 5 to 11).

The scientists also warned that it is “too early to see the impact of increased contacts with return to school and workplaces,” creating further uncertainty as we head into October.

“The bottom line: we’re doing well for now. But if we want to control cases, hospitalizations and deaths we must increase vaccination rates again and keep current public health measures to limit contacts until many more (& younger) Ontarians are vaxxed,” they said. 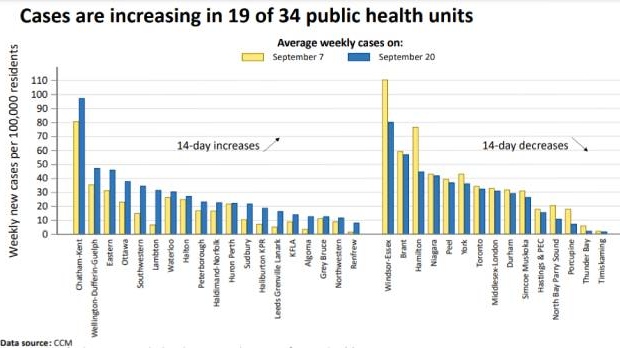 Hospitalizations are likely to rise but not rapidly

Hospitalizations in Ontario slowly rose through much of August as the Delta-driven fourth wave of the pandemic unfolded but have been relatively stable for several weeks now.

The modelling released by the science table on Tuesday said that the current trajectory that we are on suggests that there will be a gradual increase in the number of COVID patients in the ICU from 180 as of Monday night to closer to 300 by the end of October.

But it also says that any high risk of a rapid increase in ICU occupancy can be negated “with a cautious approach and early contact reductions.”

In fact, the scientists say that Ontario’s favourable situation compared to some other provinces is likely due to the fact that “we’ve kept enough public health measures in place to keep some control on contacts,” even as businesses reopened and larger gatherings were permitted.

“Today’s modelling further reinforces that as a result of Ontario’s extremely cautious approach, including maintaining strong public health measures such as indoor masking, the province’s public health and health care indicators remain stable or are improving,” a spokesperson for Minister of Health Christine Elliott said in a statement provided to media outlets following the release of the latest modelling. “In fact, Ontario continues to report one of the lowest rates of active cases in the country, well below the national average, as we have trended toward the best-case scenario projected in the last modelling.” 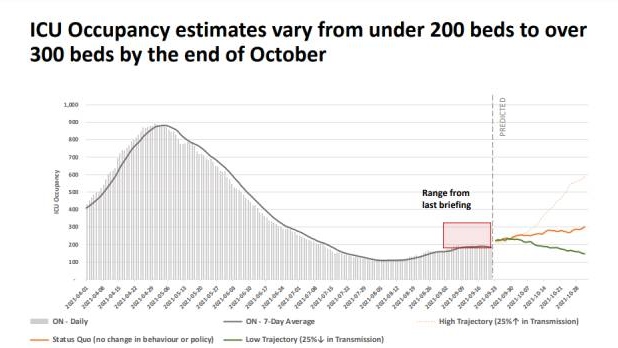 The latest modeling was posted directly to the science table’s website on Tuesday afternoon as the group passed up on holding a press conference to provide additional context for the second time in a row, despite regularly doing so throughout much of the pandemic.

Their findings, outlined in a 19-slide presentation, paints a largely optimistic picture when it comes to the next few months in Ontario, especially when contrast against the backdrop of a decision to limit elective care and implement aspects of a triage protocol in Alberta as the healthcare system there comes under enormous strain.

That said it does warn of difficult road ahead as Ontario tries to chart a course out of the pandemic.

It says that about one in 10 individuals with COVID-19 infections will continue to have symptoms lasting more than 12 weeks, likely resulting in a “significant burden” on the healthcare system.

The scientists also point out that there is already increased evidence of new chronic disease among those who have contracted COVID-19 and “higher healthcare utilization.”

Meanwhile, in a statement issued late on Tuesday afternoon NDP Leader Andrea Horwath said that the latest projections show that the “danger to children is real.”

She said that “Ontario should be doing everything in its power to stop the spread of COVID-19 among school-aged children, particularly those too young to be vaccinated.”

“Unfortunately, Doug Ford has refused to spend the necessary money to protect our kids. Instead of pinching pennies, the Ford government must invest immediately in our children’s health,” the statement reads.

People cash in their game tickets at an indoor amusement area in Niagara Falls, Ontario on Friday, July 16, 2021. Phase 3 of Ontario's COVID-19 opening plan arrived with a whimper in Niagara Falls with the return of tourists anything but a crush. The biggest visible difference were families lined up for tickets to indoor attractions and indoor dining, although most patrons seemed to still choose the patios. THE CANADIAN PRESS/Peter Power